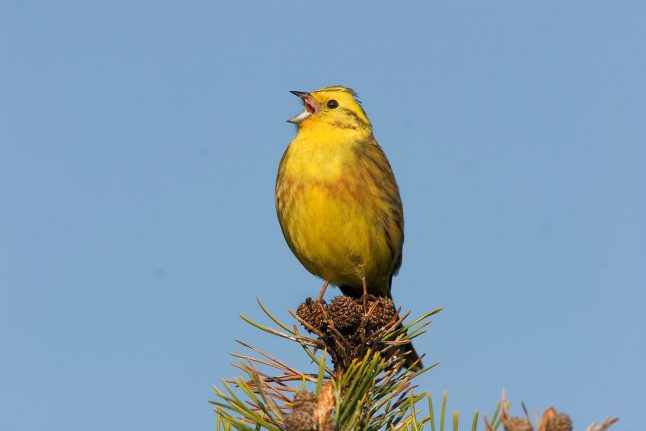 The yellow hammer (Emberiza citrinella) is one of the bird species to have seen a decline. File photo: Steffen Ortmann/Scanpix Denmark

15 of 22 species of bird connected to farmland habitats have shrunk in population size, while seven species have increased, reports the Fugle & Nature (Birds and Nature) magazine.

Counts by the Danish Ornithological Society (DOF) over the last 40 years have shown significant reductions – in some cases well over 50 percent – in populations of species such as the northern lapwing, grey partridge and skylark over that time.

The result of the analysis shows a dramatic decrease in bird populations in farmland areas, Andersen said.

“This shows that we have lost a lot of everyday nature over the last 40 years. A few generations ago, many of us grew up in the country and had the lapwing's screech imprinted on our brains, or grew up listening to the skylark's song,” he said.

Other species to be affected by the fall in populations include the yellowhammer, common linnet and swallow.

“The advance of agricultural production has had a price for biological diversity. The small biotopes where farmland birds could find a habitat are gone,” Andersen said.

DOF chairperson Egon Østergaard said there was no quick fix to the problem.

“This is caused by a changed in agricultural methods, and that animals now live in stables. We could appeal to farmers to not remove the last natural areas out there. But it is economic factors that determine how farmers must work their land,” Østergaard said.

Farmers who prioritise natural habitats should be more highly rewarded, he added.

The DOF chairperson said he hoped changes to the EU's agricultural support policies in 2020 could bring potential improvements to the situation.