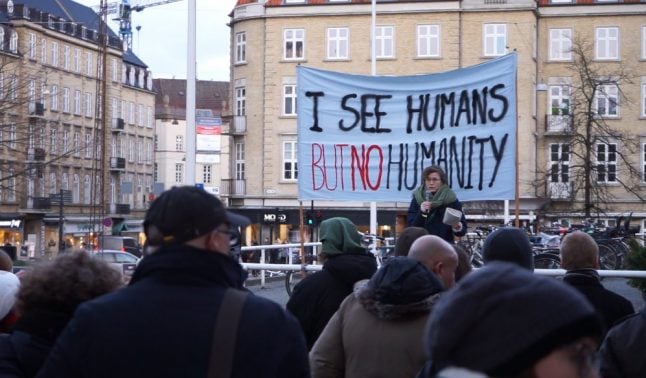 Crowds in Aarhus and Copenhagen protested on Friday against the Kærshovedgård deportation centre, demanding its shutdown and the re-opening of cases of rejected asylum seekers.

The Danish government houses rejected asylum seekers at departure or expulsion centers, at the Kærshovedgård centre, which is located in Jutland, as well the Sjælsmark centre in Zealand.

Some rejected asylum seekers who do not willingly leave Denmark are not deported due to being stateless or because no readmission arrangement exists between Denmark and their home country.

Some of the Kærshovedgård residents joined the demonstration in Copenhagen, Kaisa Skoluda, coordinator of a solidarity project with rejected asylum seekers in the centres, told The Local.

The demonstrations were a cry for mercy for rejected asylum seekers who “didn't do anything wrong except for the mistake of seeking asylum in Denmark,” activist Anemone Samy told The Local.

“Our politicians and our government say that life has to be horrible for these people [so] they [leave], and anybody abroad hears about this will not come to Denmark,” Samy said.

Martin Lemberg-Pedersen, assistant professor in Global Refugee Studies at Aalborg University's Department of Culture and Global Studies, told The Local in November last year that the circumstances at the centre had been proven by studies to cause psychological illness.

“This is a very serious situation, due in part to the very rationale behind such expulsion centres. They are built on a logic that people can be motivated to leave the country. This means that the centre's main function is to impose living conditions so intolerable that people will leave. Consequently, [the centres] are not created in a way that allows for a normal, healthy life,” Lemberg-Pedersen said.

“What we need to speak about in Denmark also is not just the fact that these camps are here, but the fact that we allow this to exist in a country that we say is a free country,” Samy told The Local during Friday's protest in Aarhus.

“I can understand wanting to be in Denmark. I'd also much rather be here than in Iraq or Afghanistan. But that makes no difference. If you are not being persecuted, you cannot be in Denmark – so you must leave,” Støjberg said.

Kærshovedgård, a former prison, was converted into a departure centre in 2016. Its maximum capacity is 600 residents.