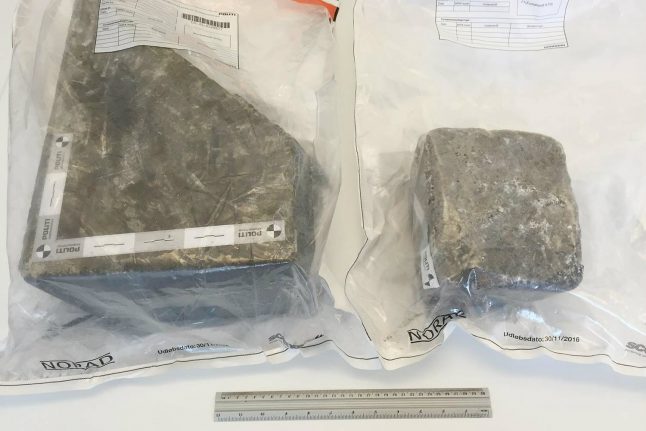 The two stone blocks thrown from a motorway bridge in August 2016, killing one. Police are treating the crime as a murder. Photo: Fyns Politi/Polfoto/Ritzau

One or more individuals are behind the crimes on the E20 motorway on the island of Funen, where rocks have been thrown from bridges on to oncoming traffic on a number of occasions.

“They will not stop until they are caught,” Deputy Chief Superintendent Per Lydiksen Laursen of Funen Police said on Friday morning, drawing a parallel between the incidents and serial criminals.

Police hope residents in Tarup, an area in the northwest of Denmark’s third city Odense, can help with their investigation. Evidence suggests that the individual or individuals behind the crimes either live in or regularly visit that area.

A concrete block thrown from a bridge in 2016, killing a German woman who was travelling in a car on the motorway, is thought to come from the Tarup Center shopping mall, reports Fyens Stiftstidende.

The woman, Nelli Gosmann, was killed and her husband seriously injured, while the couple’s five-year-old son was not physically harmed. Police are treating the incident as a murder.

In September this year, a rock weighing 40 kilograms was thrown from a second bridge, around 200 metres from the site of the first crime. Nobody was injured, but police are investigating the case as an attempted manslaughter.

DNA from the rock used in the second case has been found to match traces from acts of vandalism, also in the Tarup area, where in December 2015 and March 2016 stones were thrown through residents’ windows.

A box of snus tobacco which also provided a DNA sample was also found near the bridge from where the second rock was thrown.

Although the DNA from the tobacco box did not match that from the vandalism incidents, the specialist brand can be bought at Tarup Center.

This week saw new stone-throwing incidents in the area.

In the early hours of Wednesday, rocks were thrown from bridges between exits 53 and 54 on the E20 motorway on Funen. Two cars were damaged.