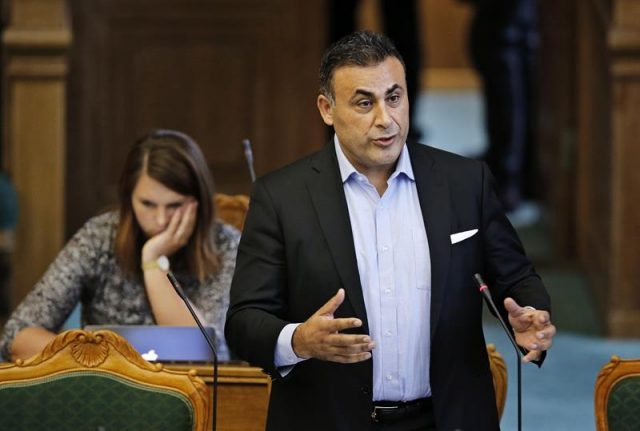 Naser Khader denied that he was threatening Khankan. Photo: Jens Dresling/Polfoto/Ritzau
In an interview with newspaper Berlingske, Khankan claimed that Khader has tried to intimidate her into silence by hinting that he would release the intimate photos.
According to Khankan, she and Khader had a short relationship in 1999 and during that time she sent the Conservative MP photos of “a deeply personal and private character”.
SEE ALSO: Denmark’s female-led mosque takes on ‘patriarchy’
In a private message sent by Khader to Khankan, which was first obtained by Berlingske and later released by Khader, he seemed to threaten her with the release of the photos as a result of their current feud over the funding of Khankan’s Exitcirklen, which works with the victims of religiously-motivated physical and psychological violence.
“I found a lot in the box yesterday, including photos we took together in Lund in 2000 and a model photo you sent to me in 1999. Do you want to stop lying?” the message read.

Khader rejected the notion that he was threatening Khankan and told Berlingske that she should “stop her manipulations and whining”. He later posted to Facebook a screenshot of what he says is the message in question along with a message accusing Khankan of lying.

“No, we are not talking about nude photos and Sherin Khankan knows it. There are simply ‘vacation photos’ from Lund and one ‘model photo’ that is a completely normal, youthful, very decent and full-clothed photo,” he wrote. “It is very opportunistic and cynical of her to try to put this under ‘#metoo’ and ‘revenge porn’.”
Khader and Khankan have been in a conflict over the MP’s attempts to remove state funding from Exitcirklen, which he alleges supports stoning and whipping as a punishment for extramarital affairs. Khankan has rejected the allegations and her lawyer is preparing a case against Khader and two other right-of-centre politicians for what she contends are false claims.
The controversy over the group’s funding has also ensnared Immigration Minister Inger Støjberg, who was accused of improperly attempting to shut off funding for the project. Sherin Khankan. Photo: Anders Rye Skjoldjensen/Polfoto/Ritzau
The Syria-born Khader is considered one of Denmark’s most respected experts on Middle East issues and is an outspoken critic of elements of Islam. Khankan, meanwhile, is best known as the founder of the first female-led mosque in Scandinavia, where she is also an imam.
Khader has criticized Khankan’s mosque project, saying that it was not “good enough” in a country like Denmark — known for having a high level of gender equality — to shy away from letting women preach to a mixed crowd.

Some of Khader’s parliamentary colleagues have called for a further investigation into his message to Khankan, but the body’s chairwoman, Pia Kjærsgaard of the anti-immigration Danish People’s Party, dismissed it as “a private matter between two people, which we at this point do not need to get involved in”.

Justice Minister and Conservative party leader Søren Pape Poulsen told Berlingske that he would have a “conversation” with Khader on the matter.
“I think it’s an unfortunate thing in every way, and it seems first and foremost to be a personal drama between Naser Khader and Sherin Khankan, that seems to have completely gone off the rails,” he said in a written statement.
Editor’s note: this article was updated on May 19th, 2021 to correct an inaccuracy in the headline.
Url copied to clipboard!