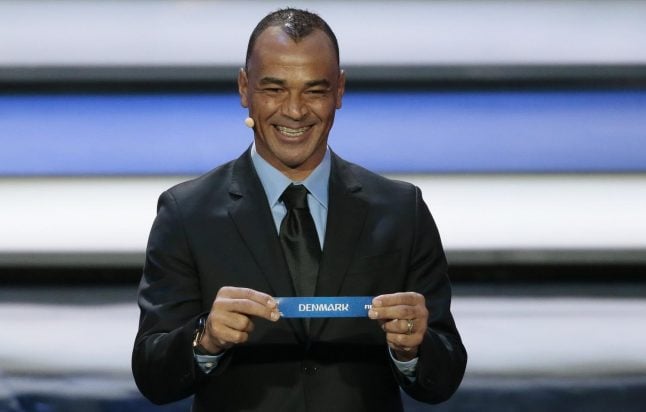 Cafu pulls Denmark out of the hat. Photo: Ivan Sekretarev/AP/Ritzau

The draw, which took place in Moscow on Friday, saw Brazilian legend Cafu place Åge Hareide’s team, who qualified for the finals with an emphatic 5-1 aggregate win over the Republic of Ireland, against the three opponents.

Denmark will play their opening game against Peru on Saturday 16th June at the Mordovia Arena in Saransk, around 400 kilometres southeast of Moscow.

It will be the South American nation’s first World Cup appearance since 1982.

The Danes will travel further east for the clash with Australia at the Samara Arena on June 21st.

Both stadiums are still under construction as Russia prepares for its first World Cup.

Denmark’s final group game will be a June 26th showdown in Moscow with 1998 champions France, one of the pre-tournament favourites.

National team captain Simon Kjær reacted to the draw by telling broadcaster DR that he believed the red and whites had a good chance of progressing to the knockout stages.

“We have to be satisfied with that World Cup group. It will be incredibly exciting, and we have to approach the group as we did the qualification group,” Kjær said.

“We always believed we would go through and now we believe we will go through from the World Cup group. We aim to go through – no doubt about it,” the central defender added.