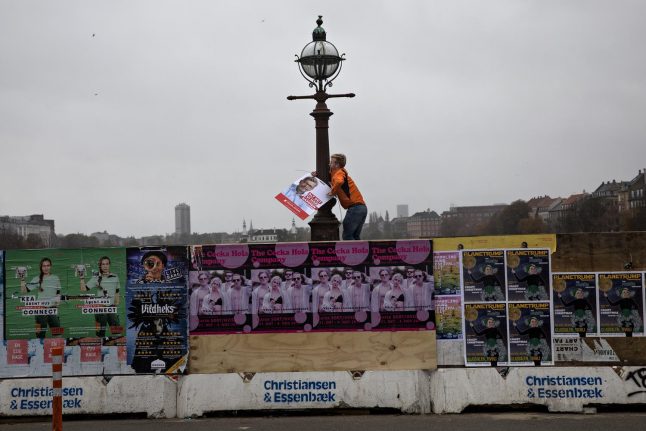 Regional and municipal election placards being put up in Copenhagen. Photo: Jacob Ehrbahn/Polfoto/Ritzau

Citizens of other EU countries plus Norway and Iceland, as well as other non-Danish nationals who have lived in the country for three years or more prior to the election are all eligible to participate in the November 21st municipal and regional polls.

With 15 percent of foreign-national voters, Copenhagen is the municipality with the largest proportion of EU citizens amongst its eligible voters, according to the analysis.

When voters are considered in terms of regions (regioner in Danish) – supra-municipal administrative areas primarily concerned with health care, welfare and social development – the Capital City Region (Region Hovedstaden) also has the largest proportion of EU citizens of any part of Denmark, at 5.5 percent.

That compares to 2.5 percent EU citizens in the population of the neighbouring Zealand Region – the lowest figure in Denmark.

High numbers of non-national voters mean these groups have could a potentially significant influence on election outcomes.

While campaigns based on mobilising EU citizens have been successful in the past, they are rare.

Turnout amongst citizens of new, mostly Eastern European EU countries in the 2013 municipal and regional elections was as low as 14.7 percent.

Low turnout by foreign nationals can therefore result in a noticeably lower overall turnout figure compared to general elections, in which only Danish citizens may vote.

EU voters can potentially change the outcome of the regional and municipal elections, particularly in areas like the Copenhagen Municipality and Capital Region zones, says lawyer Nadja Schou Lauridsen of Tænketanken Europa.

“There is a difference [in potential influence] related to both how close the vote is in individual municipalities as well as proportion of EU voters. If the proportion is 10-15 percent, as it is in Copenhagen, that can make a difference. There are also other enclaves in Denmark where there are large numbers of EU citizens, such as the border with Germany, where EU voter proportion is five percent – that’s a lot,” Lauridsen told The Local.

The nature of the potential change in outcome is something of an unknown quantity, Lauridsen said.

“Not that much is known [about how EU citizens in Denmark would vote]. If they vote differently to the rest of the population, then yes, that would change the result. For example, if they all voted for the Red Green Alliance [Enhedslisten], that would have a very clear effect,” she said.

A potential for Danish politicians to pick up extra votes by addressing EU citizens can be seen in turnout numbers, the analyst told The Local.

“Danish turnout for these elections is around 70 percent, for EU citizens it is around 30 percent and for Eastern Europeans as low as 14 percent. So if politicians are able to involve the many EU citizens in local democracy, there is potential for them to pick up some votes,” Lauridsen said.

A total of 355,881 foreign nationals are eligible to vote in the 2017 municipal and regional elections – an increase of 33 percent on 2013, according to Tænketank Europa’s figures.

Of those, 179,989 are EU citizens – four percent of all eligible voters in Denmark.

ELECTIONS
EXPLAINED: Where in Europe can non-EU foreigners vote in local elections?
Url copied to clipboard!