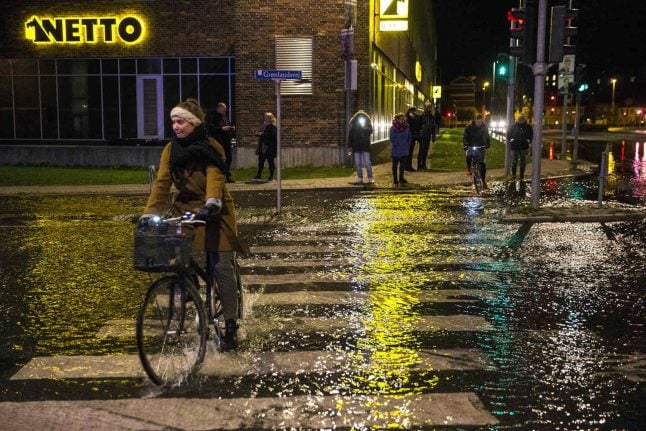 But raised water levels have not caused major damage and are now receding, police have reported.

“It has been very windy, particularly in the Kattegat sea, which is part of what has caused water levels to rise,” said Martin Lindberg of the Danish Meteorological Institute (DMI).

At 1:40am Monday DMI reported water levels had peaked “in all areas”.

Water began to rise along the Danish coast and at fjords and rivers across the country from 6pm on Sunday.

A 60-year-old man in the town of Svinninge was killed when he lost control of his car due to water on the road at around 9pm, reports Ritzau.

By 10pm, the high water was gradually receding on the island of Funen, where the worst of the flooding had been forecast. High water levels in Odense Fjord reached 162cm before beginning to recede, reports broadcaster TV2.

At Roskilde, steps were taken to protect the city’s Viking Ship Museum, which houses five original Viking ships excavated in the area, with water levels as high as 160cm forecast.

But water did not rise as far as had been feared.

“We did not get anywhere near 160 centimetres. The highest we measured in the Fjord was 131 centimetres,” Mid and West Zealand Police communications officer Merete Scheensbeck said.

Scheensbeck confirmed that the museum, which is located at the fjord, was undamaged.

“That is thanks to good work by authorities and a big effort by volunteers,” she said.

In nearby Frederikssund, the Crown Prince Frederik Bridge – which crosses the Roskilde Fjord – was closed temporarily the storm before being reopened at around midnight.

Ingolf caused some disruption in other parts of Denmark.

Several roads were closed in harbour areas in the towns of Horsens and Vejle in Jutland. A closed road due to flooding in Horsens. Photo: Mikkel Berg Pedersen/Polfoto/Ritzau

Aarhus was also affected by problems related to the high water level.

DMI also issued a warning regarding potential flooding in coastal areas of northern Zealand relating to high water levels there.

That warning remained in place until Monday morning.