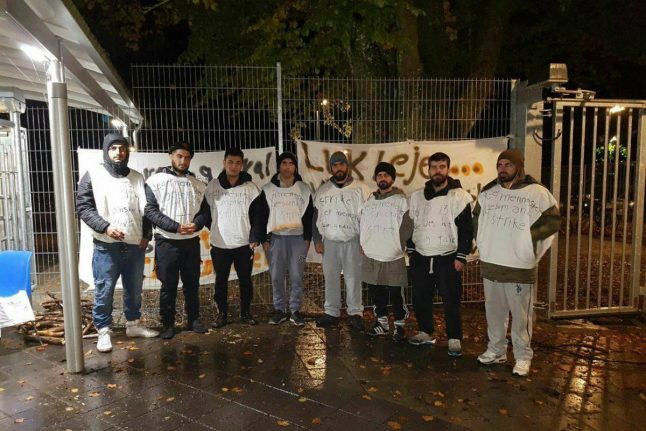 The hunger strikers hope to call attention to what they feel is an intolerable situation with no clear solution, a resident at Departure Centre Kærshovedgård, where the hunger strike is taking place, told The Local.

“When we were moved [to the centre], we didn’t know what it would be like. After a few months we lost hope. Everything is just getting worse and worse,” Iranian resident Kamran Mohammadi said.

Kærshovedgård, a so-called udrejsecenter (departure or expulsion centre), houses rejected asylum seekers who have not yet left Danish territory, for example due to being stateless or because no readmission arrangement exists between Denmark and their home country.

Mohammadi, a rejected asylum seeker who has lived in Denmark since 2008, initially at the Sandholm refugee facility and now at Kærshovedgård, said that he and others at the centre had been made to feel like criminals, despite not having broken any laws.

“We respect the rules but we feel as though we have committed a crime. It creates a bad atmosphere,” he said.

The 30-year-old Iranian, who spoke to The Local’s reporter in fluent Danish over the telephone, said that he had spent his “prime years” in the Sandholm and other refugee centres, having come to Denmark as a refugee at the age of 21.

Mohammadi said that his background as a political dissident made it impossible for him to return to his homeland.

“Some of us have cooperated and gone back to Iran, but for others, it’s not possible. We have no help here. No Danish lessons, no activities. We have to sign forms three times a week and speak to police who ask every time why we haven’t returned home. They say ‘why don’t you leave, you have no opportunities in Denmark’. It’s making people mentally ill,” the Iranian said. Messages written onto hunger strikers' clothing read “I'm a human like everyone else”. Photo: Elisabet Kass

Martin Lemberg-Pedersen, assistant professor in Global Refugee Studies at Aalborg University’s Department of Culture and Global Studies, told The Local that the circumstances at the centre, where rejected asylum seekers exist in a state of limbo, had been proven by studies to cause psychological illness.

“This is a very serious situation, due in part to the very rationale behind such expulsion centres. They are built on a logic that people can be motivated to leave the country. This means that the centre’s main function is to impose living conditions so intolerable that people will leave. Consequently, [the centres] are not created in a way that allows for a normal, healthy life,” Lemberg-Pedersen said.

Located 13 kilometres from Ikast in Jutland, the Kærshovedgård facility is one of two deportation centres in Denmark used to house rejected male and female asylum seekers who have not agreed to voluntary return, as well as persons with so-called ‘tolerated stay’ (tålt ophold) status, who do not have permission to reside in Denmark but cannot be deported.

Persons with a deportation sentence are also held at the facilty.

The three groups are not separated during day time, according to information provided to The Local.

The centre opened in March 2016 following the approval of the so-called ‘asylum package’ by the Danish government in a motion led by immigration minister Inger Støjberg in 2015.

That law provided for the opening of the expulsion centre – a type of facility that did not previously exist in Denmark – based on the 2008 EU Returns Directive.

Denmark had previously chosen not to implement the use of such centres due to the foreseen consequences for those detained in them, Lemberg-Pedersen said.

This changed once Denmark’s first expulsion centre at Sjælsmark was opened by the previous Social Democrat-led government in 2013, he added.

There are no fences or bars to keep people inside or outside the facility, but the nearest shop is seven kilometres away in the town of Bording. There are no public transport connections.

People living at the centre are not permitted to make their own food and must spend every night at the centre unless special permission is granted.

Rejected asylum seekers who have not agreed to be returned to their own countries are also barred from taking on voluntary work within the centre. Lemberg-Pedersen echoed comments made by Mohammadi – that conditions are similar to those usually detained for being convicted of crimes.

“These things contribute to making conditions intolerable. This kind of camp technology places already-vulnerable people in intolerable situations, and centres like this have a track record of breaking people down. Research tells us that people reach a threshold after which they begin to break down, with a range of severe psychological and psychosomatic consequences,” the assistant professor said.

Residents at the deportation centre who feel unable to return home end up feeling that there is “no end”, he added.

“They are allowed to do none of the basic activities that are most important for all of us – because these activities show perspective and a future. Therefore, they end up taking desperate measures like these,” Lemberg-Pedersen said in reference to the hunger strike.

Tone Olaf Nielsen, programme and traineeships co-ordinator at Trampoline House, a Copenhagen independent citizens' centre for asylum seekers and refugees, told The Local that hunger strikers hoped to shine light on their situation and, in some cases, have their cases reopened.

Nielsen visited Kærshovedgård on a number of occasions before the protest began.

“It’s a problem that these deportation centres are opened with such awful conditions, because [residents] have not committed any crime, other than being unable to leave,” she said.

“The ministry’s position is that they can leave, but in reality, they can’t,” she added.

A number of asylum seekers whose cases were rejected by both the Danish Immigration Service (Udlændingestyrelsen) and Refugee Board (Flygtningenævnet), with which appeals can be lodged, have previously succeeded in having their cases reopened after receiving legal assistance, Nielsen said.

This shows that incorrect decisions can be made by both boards, despite the contention of authorities that this is not possible, she added.

“People are desperate to be heard and are living under these conditions, so this is their last option – having control over their own deaths,” she said.

Many of the centre’s residents have – like Mohammadi – lived in Denmark long enough to establish a strong connection to the country, Nielsen said.

“The interned people can have connections to Denmark related to their long stays – they have families and children. It takes a long time – sometimes seven to nine years – to come through the system. But now it’s not possible for them to buy an ice cream for their children,” she said.

The Local has contacted Departure Centre Kærshovedgård for comment.