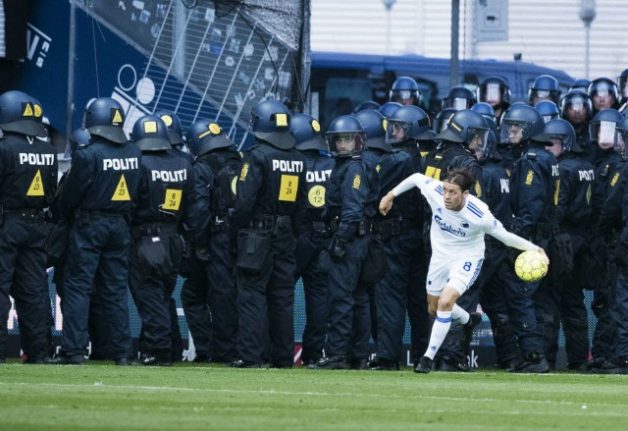 Riot gear-clad police had to take the field during the incident. File photo: Claus Bech/Scanpix
The 44 hooligans are facing a combined total of 123 charges and there could be more to come.
“That number could rise because we are not finished with the investigation,” Charlotte Skovby of the Copenhagen Vestegn Police told the news agency.
Violent clashes between the rival fans flared up in the FC Copenhagen (FCK) section of Brøndby Stadium after Brøndby scored to take a 1-0 lead in the closing stages of the match, which they won by the same score.
SEE ALSO: Danish police look to make arrests after new football fan violence
Photos showed masked fans throwing objects, pushing fences onto police and engaging in otherwise threatening behaviour towards the riot gear-clad police on duty inside the stadium.
FC Copenhagen manager Ståle Solbakken told DR immediately following the incident that he hoped those responsible would be banned for life.
“It is terrible for everyone, first and foremost for FCK, and we must do everything to make sure those responsible are found and never enter a football stadium again,” he said.
Fans of the two teams also clashed violently after ith fan violence after May's Danish cup final in an incident that was described at the time as the worst of its kind in Denmark since 2000.