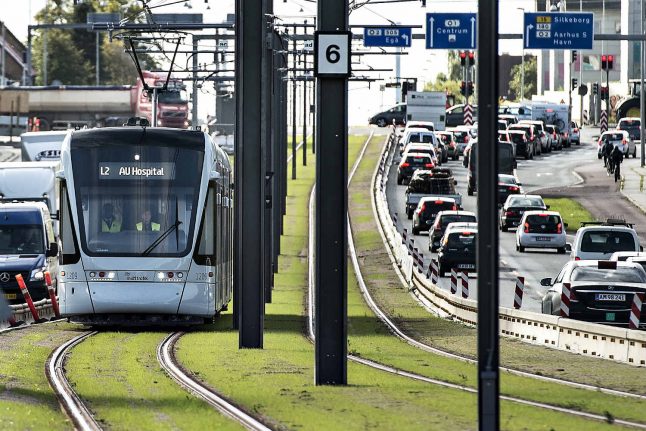 Aarhus Letbane trains, seen here during a test run, will not be carrying passengers for a while yet. Photo: Henning Bagger/Scanpix

A huge opening ceremony at the city’s Dokk1 flagship library building involving live music, speeches and the maiden passenger voyage of the brand new trains was cancelled at the last minute on Friday, after authorities from the Danish Transport Authority declared safety procedures put in place by operator Keolis to be insufficient.

The light rail, with a budget of 3.5 billion kroner (470 million euros) financed by the state and regional municipalities, has been several years in the making, with construction visible in Aarhus’ streets since 2013.

Keolis’ security chief for the project has been relieved of his position following Friday's development, reports broadcaster DR.

The Danish Transport Authority (Trafikstyrelsen) told DR Tuesday that it expects the Letbane to be opened in the “near future”.

The authority will meet Keolis next week to discuss the issues that led to the safety permits being withheld, according to the report.

Aarhus Letbane submitted a report Tuesday detailing what went wrong prior to Saturday’s cancellation of the railway’s opening.

The light rail operator writes in its report that 57 of the 59 problems cited by the authority in its refusal to issue the permit have now been solved.

Kåre Clemmesen, vice-director of Trafikstyrelsen’s Transport, Building and Housing sub-section, told DR that he felt Aarhus Letbane had taken the safety issues presented to it seriously.

“We anticipate that they will send things to us so that we are able to move on in this process. That is their assessment, but I can only say it is positive that they are taking so much action on this,” Clemmesen said.

The vice director added that his assessment of how long it would take for the light rail to be ready for opening had not changed since last weekend, namely approximately one and a half to two months.

“It will, in any case, not be tomorrow or the day after, that’s certainly not realistic. We will hopefully reach our goal in the near future, but as an authority I can’t give any guarantees,” he said.

Aarhus Lord Mayor Jacob Bundsgaard told newspaper Politiken following the release of the Letbane report that he hoped it would not take long until the light rail trains were running.

“As I read [the report], there has been extraordinarily poor communication between Letbanen, the operating company and Trafikstyrelsen. It is important to say that, with regard to physical safety, everything is in place. There is no cause for concern in that regard. What was insufficient is paperwork related to safety operating procedures,” Bundsgaard said.

The Mayor added that it was “very dissatisfactory that the task was not completed”.

Keolis’ security leader for the project, whose remit was to implement a system outlining processes, procedures and instructions related to security on the rail network – the issue cited by Bundsgaard – has now left his position, reports DR.

Aarhus Letbane writes in its report that that decision was due to a lack of confidence between Transport, Building and Housing authority and the security head.

READ MORE: All the news from Aarhus