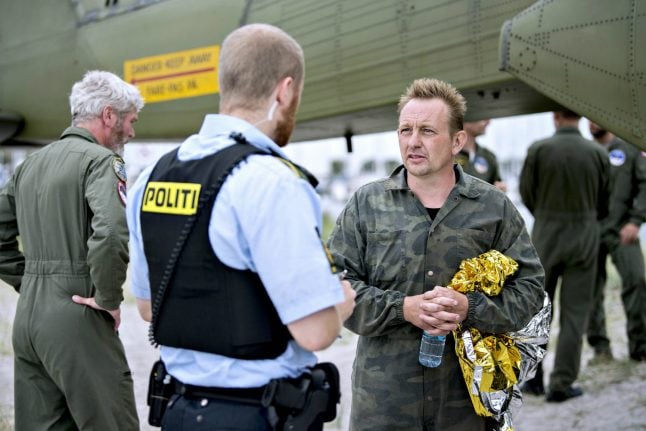 The Danish submarine maker is suspected in connection with the death of Kim Wall, a Swedish journalist whose body was found earlier this week.

Freelance journalist Wall was last seen on Thursday August 10th, after boarding the 18-metre UC3 Nautilus submarine, apparently as part of her work on a feature story about Madsen.

Madsen was brought back alone to a harbour on Copenhagen on Friday August 11th, after the vessel sank in waters near Køge Bay.

He was rescued just moments before his submarine sank, an event investigators believe was deliberate.

Madsen initially said he had dropped Wall off alive on the Refshaleøen island, but later changed his story to say she died in an accident on board and he had buried her body at sea.

Wall's body was found in waters off Copenhagen on Monday.

Inventor and entrepreneur Madsen has spent his life attempting to break boundaries with his space and sea projects.

“My passion is finding ways to travel to worlds beyond the well-known,” the self-taught engineer wrote on the website of his Rocket Madsen Space Lab.

No stranger to media appearances, Madsen tested a rocket-driven centrifuge in front of TV2’s cameras in March this year.

In the video of the test, a launchpad-like countdown precedes the ignition of a powerful rocket before a small capsule containing Madsen accelerates to g-force speeds, revolving furiously around its own axis.

In a 2014 interview, Madsen claimed that his greatest ambition was to fly over Copenhagen in a zeppelin.

“I’d like to secretly build a zeppelin and fly over Copenhagen in it as a swarm of police cars chase me on the ground. I’d land the balloon between the two spires of Roskilde Cathedral as the police wait to arrest me,” he said to Søndagsavisen.

In the same interview, Madsen also stated his desire to “have a criminal track record in the long run. I don’t mean I want to rob a bank. Heavens no, it mustn’t do anyone any harm.”

On Wednesday, confirming a DNA match between muscle taken from the torso, blood found in the submarine and samples from some of the journalist’s belongings, lead investigator Jens Møller Jensen said that it appeared Wall's body had been tampered with to make it sink.

Throughout his career, 46-year-old Madsen, who is reportedly married, has championed private submarine construction and space exploration, most recently leading a grassroots effort to launch a rocket built by amateurs rather than governments or multinational corporations.

He grew up in the small lakeside town of Sæby, 100 km west of Copenhagen.

His mother was 36 years younger than his father, an innkeeper he has described as authoritarian and violent.

His parents divorced when he was six, and Madsen went to live with his father.

“When I think about my father, I think how children in Germany must have felt if their dad was a commandant in a concentration camp. How does it feel to know your own father is a villain?” Madsen said in a 2014 biography written by journalist Thomas Djursing.

He did, however, share his father's love of military history and war jets.

At 15, he created his first company, Danish Space Academy, to buy spare parts to build a rocket.

Upon his 81-year-old father's death three years later, he began studying engineering but quit once he thought he knew enough to build submarines and rockets.

In 2008, he launched the Nautilus, the biggest privately-made submarine at the time.

Around the same time, he developed his idea for private space travel.

In June 2011, he successfully launched a rocket from a floating platform on the Baltic Sea island of Bornholm.

He is described by Djursing as “not violent”, and he “doesn't drink, doesn't take drugs”.

Friends say he is uncompromising, doesn't like being contradicted and has frequent mood swings.

“He is angry with God and everyone,” Djursing told Danish newspaper Jyllands-Posten on August 14th.

“Conflict has followed him his whole life. He has a hard time getting along with other people – he has lofty ambitions and wants to do everything his way.”

On August 16th, his half-brother Benny Langkjær Egeso told Swedish tabloid Expressen that Madsen “is very strange and that turns him into his own greatest enemy right now”.

Friend and submarine colleague Gwaino Razz also told Expressen that Madsen “is unique, but he's not a social person”.

Madsen reportedly has few material possessions, and has lived on his submarine at times.

The first rockets he launched into space were the result of a partnership with a former Nasa architect, Kristian von Bengtson.

But the two men parted company after an angry spat in 2014 and Madsen created his own space project, RLM Space Lab.

“I'm fully aware that my temper is to blame for Kristian's exit and I'm very sorry it has come to this,” Madsen wrote in a statement at the time.

The inventor also fought with the 25 volunteers he led for three years to build the Nautilus. After a 2015 conflict, the sub's board of directors transferred ownership to him.

Madsen had sent a text message to two board members at the time, saying “there is a curse on Nautilus”.

“That curse is me. There will never be peace on Nautilus as long as I exist,” Madsen wrote, according to a 2015 post written by the volunteers on the sub's website.

“You will never have a good feeling inside the submarine… do not throw more lifeblood into that boat.”