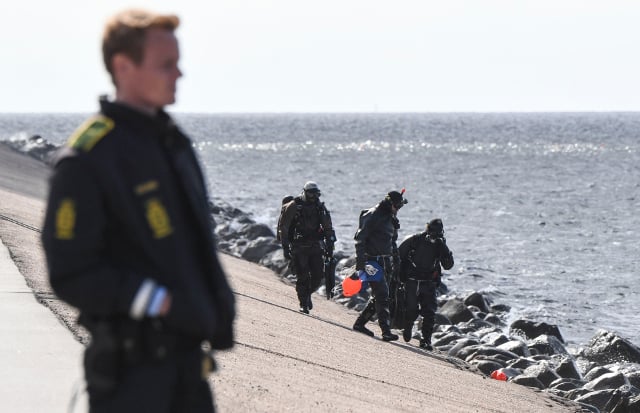 Police divers examining the area where the body was found. Photo: Johan Nilsson/TT

“It is with infinite sadness and shock we have received the news that the remains of our daughter and sister Kim Wall have been found. We are not yet able to see the full extent of this disaster, and a lot of question marks remain,” an official statement published on her mother's Facebook page read.

Copenhagen police confirmed on Wednesday that DNA taken from a torso found near the shore on the island of Amager, south of the Danish capital, on Monday afternoon matched that of Wall's DNA.

The 30-year-old went missing after having boarded the 18-metre UC3 Nautilus submarine on August 10th, apparently as part of her work on a story about its owner, Danish inventor and entrepreneur Peter Madsen.

Originally from Trelleborg in southern Sweden, Wall's work as a freelance journalist had taken her around the world reporting on stories for newspapers and magazines such as The Guardian, Foreign Policy and Harper's. She had lived in Paris, Beijing, and New York.

“The tragedy has not only affected us and our extended family, but friends and colleagues all over the world,” wrote her family in the statement on Wednesday.

“In the terrible days following Kim's disappearance we have received countless examples of how loved and appreciated she has been, as a human being and friend as well as a professional journalist. There's been evidence from all corners of the world of Kim's ability to be a person who makes a difference.”

“She has found and told stories from different parts of the globe, stories that have to be written. Kim travelled for months in the Pacific to let the world know what is happening to the population of those islands sinking into the sea as a result of atomic explosions. She let us follow her to earthquake-hit Haiti, to Idi Amin's torture chambers in Uganda and the mine fields of Sri Lanka. She gave a voice to the weak, the vulnerable and the marginalized.”

“That voice would have been needed for a long, long time. That will now not be the case.”

A search operation for Wall was launched after Madsen was brought back alone to a harbour on Copenhagen on Friday August 11th after the vessel sank in waters near Køge Bay. The submarine owner initially claimed that he had brought Wall back to land at around 10.30pm on the night of her disappearance.

Copenhagen Police confirmed on Monday morning that Madsen told Copenhagen City Court on August 12th that he had “buried Wall at sea” after she died on board due to an “accident”.

On Tuesday, police said that the body's arms, legs and head had been ‘deliberately' removed.

“Current status is that there is a torso whereby the arms, legs and head have been removed by means of deliberate cutting,” lead investigator Jens Møller Jensen said in a video statement released to press via Twitter on Tuesday.