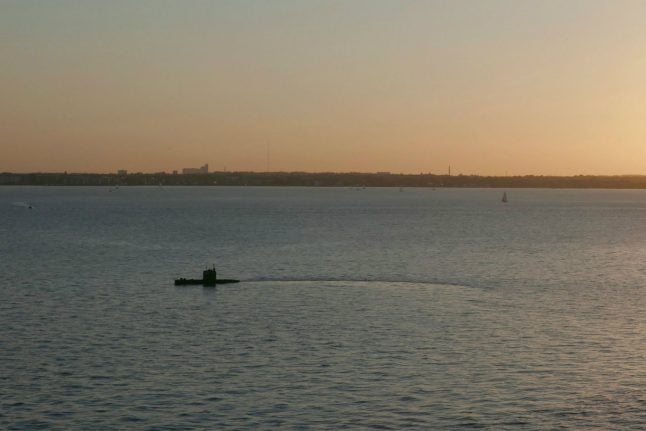 Kim Wall, 30, vanished after having boarded the 18-metre Nautilus sub on Thursday evening, apparently as part of her work on a feature story about its owner, inventor and entrepreneur Peter Madsen.

“The investigations confirm that the sinking of the submarine was ostensibly a consequence of a deliberate act,” Copenhagen police said in a statement.

Early Friday, Danish authorities announced they were looking for the Nautilus in waters off Copenhagen.

The vessel was located in a bay in Køge, some 50 kilometres south of the Danish capital. Just after being found, Madsen was rescued and the submarine suddenly sank.

Madsen said in media interviews after his rescue that the sub encountered a problem with the ballast tank.

The Nautilus was refloated and towed to the Copenhagen port on Saturday, then emptied of water overnight. On Sunday police entered the sub and found it empty.

Madsen, who describes himself on his website as an “inventrepeneur”, claims he dropped off Wall on Refshaleøen island on Thursday after she had completed her interview.

The 46-year-old is accused of negligent manslaughter and was on Saturday remanded in custody for 24 days. He denies the charges and his lawyer says her client is “hurt” by the accusation.

Wall is a freelance journalist based in China and the US. Her articles have appeared in the New York Times, the Guardian and Vice, among others.

“We're still hoping that we'll find Kim Wall alive, but we are preparing ourselves for the fact that she may not be,” Copenhagen homicide police chief Jens Møller Jensen said Sunday.

Friends of the missing journalist told broadcaster TV2 on Monday that they feared the outcome of her disappearance.

“The worst thing would be if she was never found, and we never get answers,” Wall’s friend Malin Franzén told TV2 Lorry.

“She wrote many unusual stories and visited subcultures, so when we heard about this story, before we knew Kim was involved, we actually thought it was right up her street,” Franzén said.

Sebastian Dahl Lundbergh, Franzén’s boyfriend and also a friend of Wall’s, said that it was “impossible” that she was keeping herself hidden from authorities.

“I have read on the internet people speculating that she’s hiding on purpose. That’s unthinkable,” he said.

“Something has happened to her, and I truly hope that the police find her, either dead or alive. She had great plans for the future,” Franzén added.

Swedish and Danish authorities are cooperating on the search for the missing reporter.

Madsen, who was described in a 2014 book as “Denmark's Do-It-Yourself Astronaut”, had wanted to launch himself into the space race before building the crowd-funded Nautilus, the biggest privately-made one ever when he built it in 2008.

Police have now asked for anyone who has previously sailed in the submarine to come forward with information.

Police are keen to learn more about how previous trips with Madsen in the submarine were conducted out and which routes were taken, according to the press statement.

Thursday night: Nautilus is spotted sailing unusually close to a freight ship with its external lights switched off, according to an anonymous report provided by a witness to Swedish daily Aftonbladet.

Sunday: The raised submarine is brought to land and police technicians begin their examination, but no body is on board.

Monday 2:26pm: Following technical examination of the wreck, police announce that they believe the submarine to have been deliberately sunk.