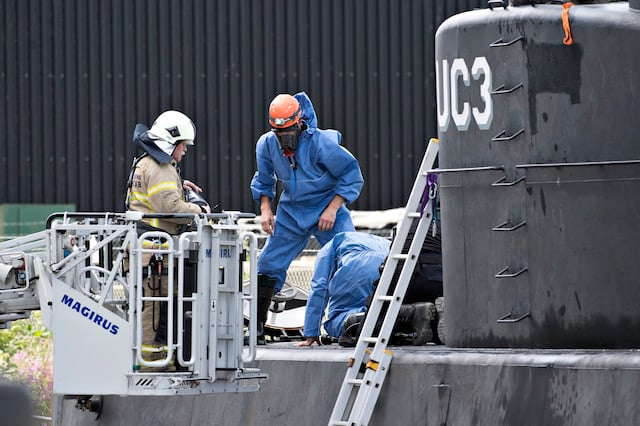 Forensic investigators on the UC3 Nautilus submarine on Sunday. Photo: Jens Nørgaard Larsen/Scanpix
“The sub has been searched and there is nobody on board — neither dead nor alive,” Copenhagen police homicide chief Jens Møller told reporters.
The journalist had been aboard the submarine before it sank. The vessel's 46-year-old inventor Peter Madsen has been accused of negligent manslaughter and was on Saturday remanded in custody for 24 days.
He has denied the allegations.
READ ALSO: Danish submarine owner detained over Swedish journalist's death
The vessel, the Nautilus, was refloated and towed to the Copenhagen port on Saturday, then emptied of water overnight. On Sunday police entered the sub and found it empty.
Police have identified the missing journalist as Kim Wall, a 30-year-old Swedish woman who was writing a feature about Madsen.
Nothing has been heard from her since Thursday evening when she boarded the sub with Madsen.
Her boyfriend alerted police early on Friday that she had not returned home as planned.
Madsen claims he dropped her off on the Refshaleøen island on Thursday evening after the interview.
Early on Friday, Danish authorities announced they were looking for the Nautilus in waters off Copenhagen.
Around midday Friday, the vessel was located in a bay in Køge, some 50 kilometres (30 miles) south of the Danish capital. Just after being located, Madsen was rescued and the submarine suddenly sank.
Madsen said in media interviews after his rescue that the sub encountered a problem with the ballast tank.
However, Møller said Sunday it appeared as though the sub was intentionally sunk, amid media speculation that Madsen may have downed the vessel to cover up a crime.
“It appears as though it was a deliberate action that caused the sub to sink,” Moller said.
Wall is a freelance journalist based in China and the US. Her articles have appeared in the New York Times and the Guardian, among others.
“We're still hoping that we'll find Kim Wall alive, but we are preparing ourselves for the fact that she may not be,” Møller said Sunday.
Madsen made headlines when he launched the 18-metre Nautilus in 2008, at the time the world's biggest homemade submarine.