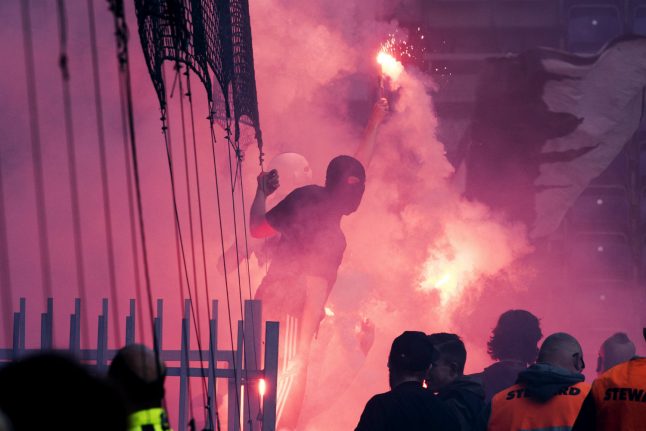 Hooligans disrupted the match between the Copenhagen rivals for the second time in as many meetings, with fan violence after May’s Danish cup final between the two teams described as the worst in Denmark since 2000.

Police now have an increasing number of cases to follow up, with violent scenes in the FC Copenhagen (FCK) section of Brøndby Stadium after Brøndby scored to take a 1-0 lead in the closing stages of the match, which they won by the same score.

“Our investigators have been working through the evening and night to produce a number of cases. We have opened 42 cases so far. Of these, 19 are cases of violence against on-duty officers, and two of violence against stewards inside the stadium. So we are talking about a serious level,” Deputy Chief Inspector Brian Toftemann of West Copenhagen Police told broadcaster DR.

“We also have cases of fireworks violations, breach of laws relating to the wearing of masks and some narcotics,” he added.

“Based on that, we expect to identify and open even more cases and charges against yesterday’s culprits,” he added. Six people have currently been charged as a result of the violent scenes, which left two officers and guards with minor injuries, reports DR.

The six people were arrested and then released after police questioning.

Photos from the away fans’ section of the stadium show masked fans throwing objects, pushing fences onto police and engaging in otherwise threatening behaviour towards the riot gear-clad police on duty inside the stadium.

FC Copenhagen manager Ståle Solbakken told DR that he hoped those responsible for the incident would be banned for life.

“It is terrible for everyone, first and foremost for FCK, and we must do everything to make sure those responsible are found and never enter a football stadium again,” he said. “It is unacceptable, and I thought we had grown out of this several years ago, but we apparently haven’t,” he told the broadcaster.

Hørsholt added that he would do everything he could to aid the police investigations.

Toftemann said he was uncertain as to the underlying cause of the disturbances.

“I’ll have to leave it to the persons who started the disturbances to answer why on earth they became so upset. They’ve had goals scored against them before, so it must be a question they can answer,” he told DR.