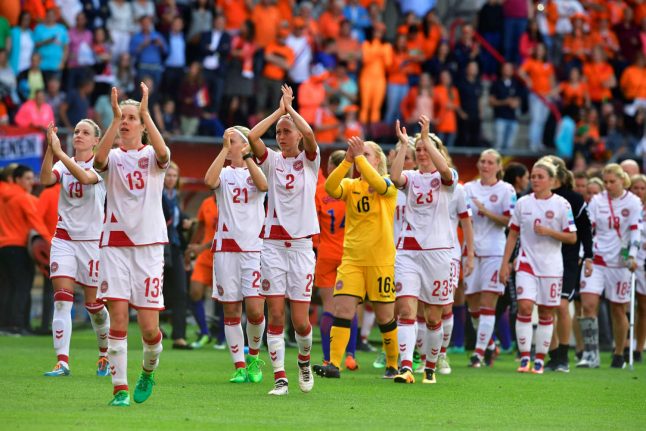 The Danish women's national side's outstanding run at Euro 2017 came to a disappointing end in front of 28,182 fans as the host nation came out on top in the tournament's final match.

In a pulsating first half, the penetration of Danish left winger Katrine Veje and movement of forwards Pernille Harder and Nadia Nadim caused the Dutch defence problems on the counter attack during the opening stages.

Denmark were rewarded for their industriousness on six minutes when midfielder Sanne Troelsgaard was brought down in the box and Nadim converted the resulting spot kick.

But Denmark’s threat on the flank was matched with interest by lightning quick Dutch attacker Shanice van de Sanden, who outstripped left back Cecilie Sandvej for pace and cut across for Vivianne Miedema’s equaliser just four minutes later. Denmark weathered a period of Dutch pressure in the middle of the first half as the game settled down slightly from the high-octane start, although threats remained at both ends, with van de Sanden looking particularly dangerous and Harder jinking into the Dutch penalty area but failing to find a teammate with her cut-back.

The Danish team looked in real trouble on 28 minutes, when the defence failed to close down Lieke Martens, who beat goalkeeper Stina Lykke Petersen from well outside the penalty area.

Nadim had a great chance to equalise moments later after being put through by Troelsgaard, but was drawn too wide after rounding Dutch goalkeeper Sari van Veenendaal.

Captain Harder then brought Denmark right back into contention, charging down the right before cutting inside and smashing the ball into the near corner with her left foot to send the over 2,500 red and white fans in the stadium wild.

Harder’s goal was not the final Danish chance of the first half as the team in white began to dominate territorially. A long ball from the right almost saw Veje connect well enough to unnerve van Veenendaal again, and a teasing cross by Maja Kildemoes evaded Nadim.

Looking forward to the restart after THAT first half? ?#WEURO2017 #NEDDEN ????? pic.twitter.com/QVpeCi1jdI

The second 45 minutes proved to be a rough ride for Kvindelandsholdet (the Women’s National Team).

Dutch captain Sherida Spitze capitalised on a sluggish start to the second half by Denmark by placing a free-kick past a somewhat poorly-positioned Lykke Petersen on 51 minutes.

The goal seemed to take the wind from the sails of the Danish players.

Lykke Petersen was able to atone for her earlier error with a terrific point-blank save from Miedema on 61 minutes as the Dutch continued to press the tiring Danes high up the pitch.

Substitute Frederikke Thøgersen then failed to get her shot on target after van Veenendaal palmed a corner out to her.

Central defender Simone Boye became the latest in a series of injuries suffered by Denmark during the tournament, hobbling off on 75 minutes to be replaced by Line Røddik.

Denmark created a couple more chances as the Dutch ground out the final’s remaining minutes. Nadim embarked on a solo run down the left with eight minutes remaining, and Troelsgaard’s long-range effort from the resulting corner flew narrowly wide.

It was to prove Denmark’s last hope of becoming European champions as the Dutch retained possession going into the final moments of the match.

With 88 minutes on the clock, the Oranje broke forward to seal the championship as Miedema advanced into the area to finish low and score the host nation’s fourth.

?? The Netherlands are the European champions! ????

The Netherlands are only the fourth country to win the trophy.

Germany, who were beaten by Denmark in the quarter finals, have won the tournament eight times including the last six championships in a row.

Two-time winners Norway and Sweden, who won the first edition in 1984, complete the list of former winners.

“We have to take our hats off to the Dutch. They played well, were dangerous and knew when it was going to happen. They were sharp in the penalty area,” goalscorer Nadim told broadcaster DR after the match.

The striker added that it would take her a while to get over the defeat.

“I’m really disappointed. I feel like we threw away the gold medal. Maybe it will take a couple of weeks to feel happy about the performance we delivered. We showed the football world what Denmark can do. Right now, we’re obviously disappointed,” she said.

Coach Nils Nielsen told DR that he was proud of his players’ efforts, but that the Netherlands had deserved their win.

“We played our part in a good final, but lost to the better team on the day. And there’s not really that much more to say about it. Holland deserved to win. They’ve played well throughout the tournament.

“I’m incredibly proud of my players. I think they’ve performed throughout the entire tournament, including today. They left everything out there. There just wasn’t quite enough,” he said.