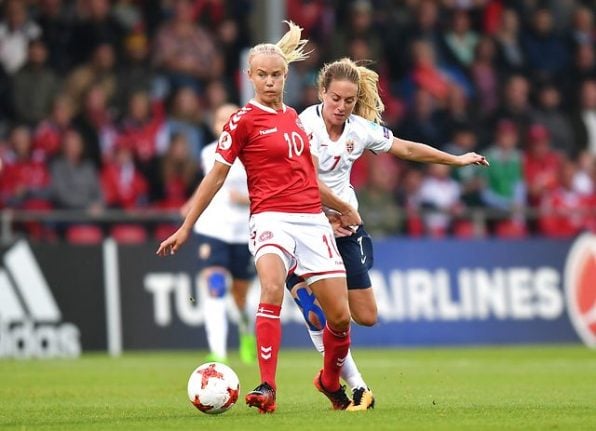 Pernille Harder, seen here in Denmark's win over Norway, said the Danes want revenge on Austria, who they face on Thursday. PHOTO: DANIEL MIHAILESCU/SCANPIX
“It was such a nice win, but now we're looking forward also,” the 24-year-old forward told AFP at Denmark's training centre in Bavel. “It's not enough for us, just to win against Germany.”
Having conceded on three minutes, Denmark came back to nix Germany's dreams of a seventh title in a row with second-half headers by Nadia Nadim and Theresa Nielsen.
Harder, who plays for Bundesliga champions Wolfsburg, said this was the biggest win of her career.
“When I play in Germany it's more special, but it was just so nice to win the game so we reached the semi-final,” she added.
Germany were unbeaten at Euro since July 3, 1993 when they lost to Denmark 3-1 in the bronze medal game.
By making the semi-finals, Denmark have equalled their result from 2013. Harder said this was due to “hard work and good discipline in defence and then a lot of speed in the offence.”
“As a team we can relax when we have time to relax and think about other stuff than football and then when we're on the field we are doing it at 100 percent,” she said. “We're never satisfied, we always want to improve as a team and also as individuals and that's key for us.”
Compared with 2013, when Denmark lost to Norway on penalties in the semi-finals, the team is different, Harder said.
“We played differently back then, the tactic is different, it was more like we're really good at possession, we had the ball more in 2013, now we're more direct.”
Harder also has a new partner in the attacking line, the Afghan-born Nadia Nadim, who was a substitute at the 2013 tournament but has become a permanent fixture up front since then.
“She's a really good player, a strong hitter, so it's nice to know that there is a good hitter like her in the box,” Harder said.
While Nadim scored against Germany, Harder is still waiting for her first goal at the tournament — but she is not bothered by her drought.
“It's important that we score as a team, and I will rather like to make assists than to score. Of course if the team needs it, I would love to score, but if I could choose whether to win the title or score, I'd rather win the title,” Harder said.
In the August 3 semi-final in Breda, Denmark are facing Euro newcomers Austria, who won their group ahead of giants France and beat another favourite Spain on penalties after a goalless draw in the quarter-final.
“They have been really good,” said Harder. “I think they have been a big surprise of the tournament, they have such a good defence and the high pressure, and they have some really good players in the front when they win the ball.”
The two teams met in a friendly on July 6 in Wiener Neustadt, Austria, and the home side earned a convincing 4-2 win.
“We lost in the friendly game so of course we want a revenge,” said Harder.