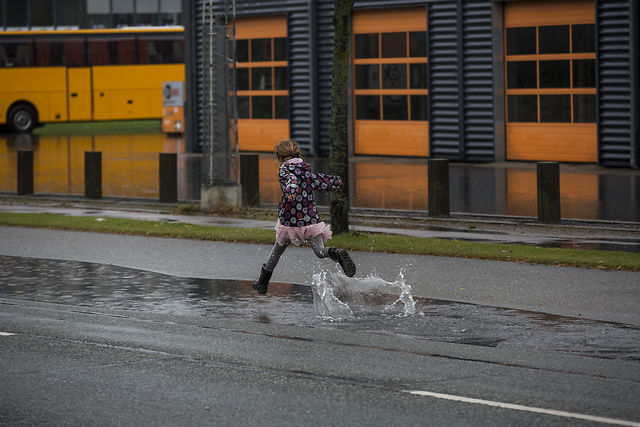 A girl splashes in a rain puddle on July 23rd; she'll likely have plenty of chances to do the same in August. Photo: Uffe Weng/Scanpix
DMI meteorologist Klaus Larsen told Berlingske on Tuesday that “there is nothing to indicate” that August will be any better than June or July.
“In August we will have a month with much more of the same. There will be more rainy days, but also days with sunshine and quick showers. We’ll get a bit of everything, just like we did in July,” Larsen said.
The DMI meteorologist said that temperatures would “be around 20 to 25 degrees at the very highest”.
Although he said it was too early to predict whether September might deliver the summer weather Danes are so desperately yearning for, it isn't terribly likely. In short, Larsen said 2017 would go down as a year without a summer.
“Without a long-lasting summer anyway. We managed to get one summer day in July, but that is hardly enough to make us look back at this summer and remember it as particularly good,” he said.
A ‘summer day' is defined as any day in which temperatures top 25C (77F) at least somewhere in Denmark. It was not until the second to last day of the month that the threshold was passed, allowing the country to very narrowly miss out on the distinction of the first summer-less July since 1979.
On Sunday July 30th, a high of 26.4C was measured on the island of Bornholm and the temperature managed to crawl up to 25.2C in the Zealand town of Holbæk, the only two locations across the country to sneak over the ‘summer’ threshold during the entire month.
DMI does not have statistics on how many times July has contained a single solitary summer day, but Larsen said there could be no doubt that 2017 has offered very little in terms of summery weather.
“We are talking about a significantly worse summer than normal. And the temperatures have been two degrees below average,” he told Berlingske.