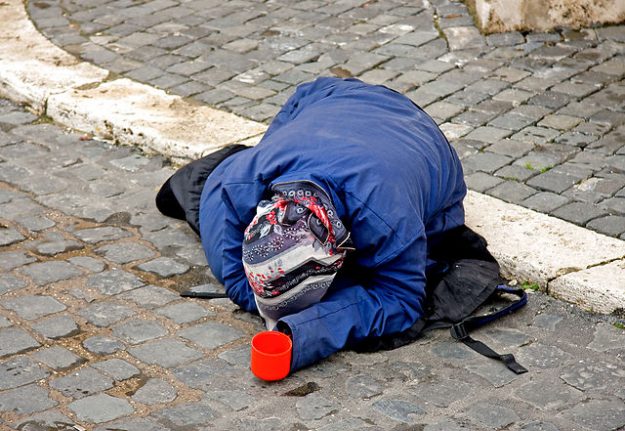 Nine people have now been convicted under Denmark's new anti-begging legislation. Photo: Shutterstock/Iris
Her sentence marks the first deportation under newly-tightened anti-begging legislation that was implemented last month by Justice Minister Søren Pape Poulsen.
It is not, however, the first time Denmark has sent someone out of the country for begging. In November, a Danish court sentenced a Slovakian woman to 40 days in prison and ordered her to be deported for begging on the street in what was the country's first ruling of its kind.
But Poulsen has declared war on begging in Danish streets and the ordered deportation of the Romanian woman is the first since his new tougher rules came into effect.
Prosecutor Marlene Beynon successfully convinced Copenhagen City Court that the 63-year-old woman posed a serious threat to Denmark, a condition that must be met in order to deport an EU citizen.
“Her behaviour is continuous and systematic. It has an adverse effect on all of the passersby who need to respond to her begging,” Beynon said according to news agency Ritzau’s report.
The prosecution further argued that the woman “bothered the public” by “attempting to make eye contact” while holding out a cup at Nørrebro Station.
The 63-year-old told the court that she has been in and out of Denmark for 15 years. She said that she begs on the streets of Copenhagen in order to support her seven children back in Romania.
“I have a lot of kids there. They eat out of the garbage can,” she said, according to Politiken’s report.
The woman had been convicted of begging two times before, which the court said played a significant role in her sentencing on Tuesday.
Her deportation comes with a six-year reentry ban.
Three others were also found guilty of begging on Tuesday at Copenhagen City Court, bringing the total number of people convicted under the new anti-begging legislation to nine.