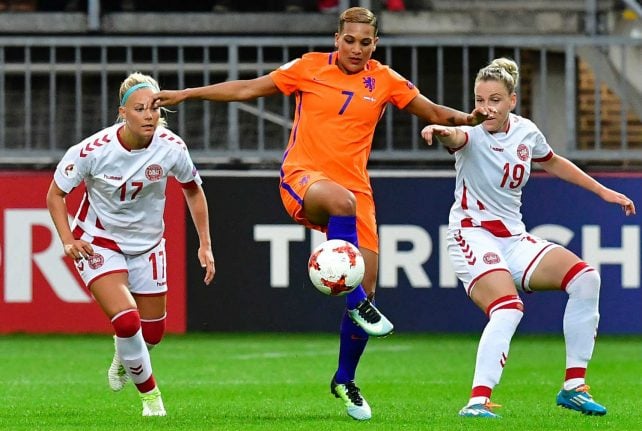 The Dutch, favourites going into the game, now top the group with six points, ahead of Belgium and Denmark on three points each.

In Rotterdam, the Netherlands were quick to put Denmark under pressure, with Vivianne Miedema missing the target in the first good chance, a minute before the penalty was awarded. Minutes later, Pernille Harder was denied by Dutch keeper Sari Van Veenendaal while Sanne Troelsgaard beat the keeper but sent her effort over the bar after the break.

Denmark stepped up the pressure in the second half but attacking midfielder Troelsgaard squandered a series of chances and Nadia Nadim headed Harder's free kick straight into Van Veenendaal.

At the other end, Spitse could have made it 2-0 but her freekick ended in the side netting.

“Denmark wanted to score and played much deeper in the second half with more players up front, and we had difficulties with that,” said Dutch coach Sarina Wiegman, whose team needs a point against Belgium to advance to the quarter-finals.

“We created some chances to score, but the Dutch goalkeeper had a great night and made some great saves,” said Denmark coach Nils Nielsen.

Striker Nadim said the Danish first half performance was not good enough to be left unpunished by the talented Dutch team.

“We played a very poor first half. We were afraid to play football. Holland are too good for us to give them so much space there. We came back well in the second half and created chances, but we weren’t clinical enough,” Nadim told broadcaster DR.

In the day's other Group A game in Breda, Belgium grabbed their first-ever win at the women's Euros by turning over 2013 runners-up Norway 2-0.

The results mean that Denmark can go through by beating Norway in the final round of group games, although they will be reliant on the result of the match between the Netherlands and Belgium working in their favour.

“We will have to beat Norway and I will be very happy if we do so,” Nielsen said.