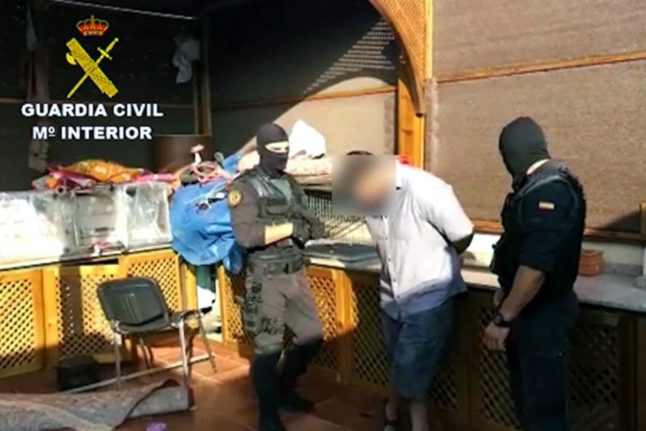 A photo released by Spanish civil authorities showing the arrest of a suspected jihadist in the enclave of Melilla. Photo: EPA/EFE/CIVIL GUARD/Scanpix

Ahmed Samsam, 27, who was detained on Friday in Malaga in southern Spain and put under official investigation at the weekend, is suspected of having fought in the ranks of Isis for more than three years.

In a statement, the ministry said photos posted on social networks showed him holding weapons, explosives and symbols of the jihadist group whose control over parts of Syria and Iraq is being eroded by Iraqi forces on the one side and US-backed fighters in Syria.

“An expert in handling weapons and explosives, he was about to acquire weapons and bulletproof vests in Spain,” it said.

Police have not said whether the suspect wanted to commit an attack in Spain.

The interior ministry said Saturday officers were searching seized equipment in order to shed light on his intentions and find out who he had been in contact with.

According to the ministry, Samsam's relatives thought “he was ready to take a step further in his terrorist activity in Europe.”

“The fact that he returned from a conflict zone, combined with his experience in using arms and explosives, as well as the important degree of radicalisation and his current interest in buying weapons make him one of the most dangerous jihadists among those arrested in Spain,” it said.

His arrest on Friday took place a day before the WorldPride parade in Madrid, the world's biggest march for gay, lesbian, bisexual and transgender rights.

According to organisers, more than a million people took part.