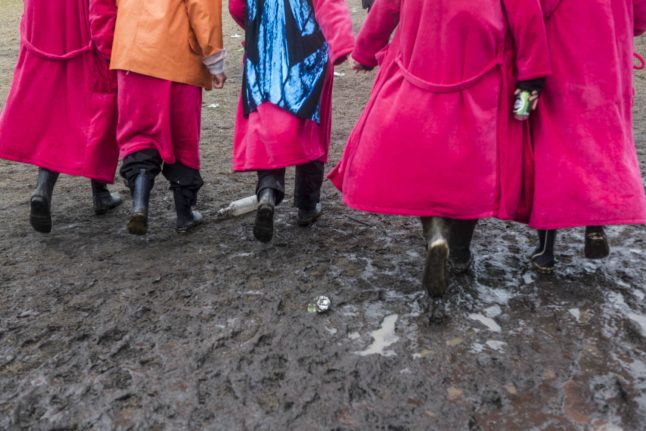 Roskilde’s Food Hall is under a roof, it is raining hard, and people are hungry. There are queues at all of the dozens of food stands. Not least at Sisters’ Cuisine.

Behind the counter an all-female team works at chopping boards, saucepans and cash registers.

The 180 food stands at Roskilde Festival are run by a mixture of established service providers and organisations that don’t specialise in food.

Sister’s Cuisine, run by Copenhagen immigration activist organisation Trampoline House, falls into both and none of these categories.

READ ALSO: FEATURE PART ONE: Roskilde 'is not just stages, but also the space between' “We want to open a small restaurant of our own, but this is a start,” says Tone O. Nielsen, a coordinator with Trampoline House, an independent community centre in Copenhagen that acts as a place of support for refugees and asylum seekers in Denmark.

3,500 people visit the organisation’s centre annually, where 200 volunteers give job training, advice and provide a social context for asylum seekers lacking a network outside of the facility in which they live.

Started in 2010 as an art project and now functioning as a community house with a range of weekly events and initiatives, Trampoline House includes as part of its weekly programme a women-only event.

“It is doubly hard to be a woman asylum seeker,” says Nielsen, adding that the centre’s events and meetings are “basically for anyone who feels a bit displaced in normative Danish society.”

Wanting to do something “more sustainable” with the project, Nielsen says that the women’s group has now branched from dinners every Tuesday and Friday into volunteer catering.

“It’s a big move for them to get into this setting. It’s a whole new challenge,” says Paula Duvå, who also volunteers with the organisation, gesturing towards the bustling queue and the women working behind the counter – who, Nielsen points out, represent as wide a range of nationalities and backgrounds as any other stand in the hall.

“Some of us are volunteers, others have cooking experience from their home countries,” Nielsen says. “Some of them were raised in patriarchal households and learned to cook that way, others actually can’t cook at first,” she adds.

Duvå explains that life inside asylum centres can be uneventful, and the allowance given to people living in them does not allow for many trips outside.

“There are two things we really want to do with this. One is to get people out of the camps. The second is to provide them with some form of work, since it’s illegal for them to take on paid employment in Denmark,” says Duvå.

Mandana Yamolaei, an Iranian refugee who spent eight years living in Danish asylum centres before being granted asylum in 2008, comes out from behind the counter having finished her shift at the stand.

“This is a great privilege for me. I’ve worked in kitchens in places like Sandholm [asylum centre, ed.], but haven’t tried anything like this before,” she says.

“It’s very exciting. There are so many happy people here, it gives me the energy to keep working,” says Yamolaei, a trained cook.

Because of high demand, the Iranian has taken on extra shifts on two separate days, working 16 hours in a day in one case.

“It doesn’t matter. The energy here just rubs off on you,” she says.

Despite the extra hours being put in by volunteers, Nielsen is confident that the Sisters’ Cuisine stand has been a success.