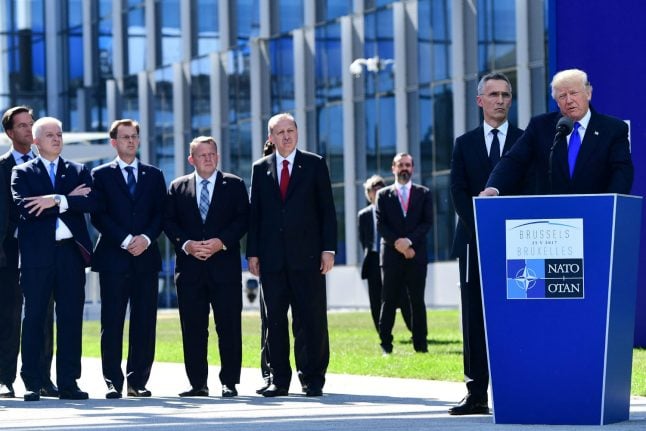 Danish PM Lars Løkke Rasmussen (4th from left) looks on as US president Donald Trump gives a speech during the Nato summit in Brussels on May 25th. Photo: Emmanuel Dunand/AFP/Scanpix

Following discussions at last week’s G7 summit, Trump is due to announce his decision on the 2015 Paris agreement later today, with reports in the US suggesting he will withdraw.

Denmark will be both “sad and worried” if the expected American withdrawal becomes a reality, “due to both the substance and because we should be able to rely on international agreements,” Rasmussen said in parliament Wednesday, according to news agency Ritzau.

There is no official confirmation of the withdrawal yet, with Trump having written on Twitter that he would make a decision by the end of the week.

“Of course I cannot dictate to him. I can encourage and appeal to him, and I’m doing that now, and I’m doing it in a situation in which the decision has not been made, you understand. I have only media reports,” Rasmussen said.

Asked whether he would take any specific actions to stop Trump’s withdrawal, Rasmussen said that he felt Europe’s position had been made clear.

“I don’t believe that the American president is in doubt about how the group of European countries sees this, and what we expect of the United States,” he said.

“It was expressed quite clearly at the G7 summit. And I have delivered the message as directly as it is possible to do – during a meeting at the White House,” the PM continued.

READ ALSO: Disharmony at G7 as Trump plays his own tune

Rasmussen also said that it was in the USA’s own interests to adhere to the agreement, since it would create growth and jobs in the United States.