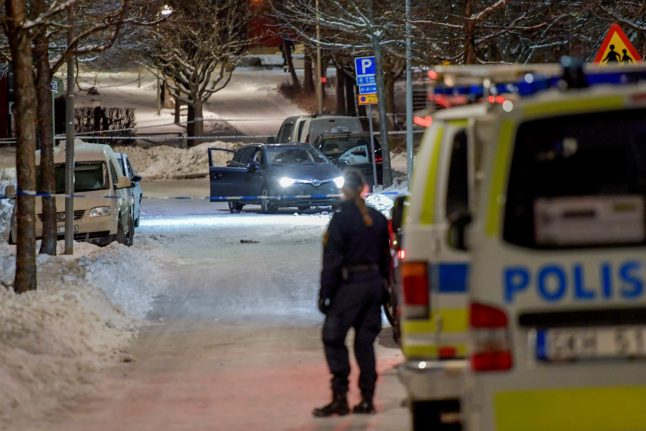 Police at the scene in Kista on March 8th. Photo: Jessica Gow/TT/Scanpix

The man, held on suspicion in absentia by Swedish police on Saturday, was arrested in Denmark in the early hours of Monday and will be brought to Stockholm for questioning, reports Swedish news agency TT.

“We want to ascertain what involvement he has had in this murder, whether or not he is the primary perpetrator,” Stockholm Police spokesperson Kjell Lindgren told TT.

Police declined to confirm any details of the arrest or the identity of the man himself.

The exact location in Denmark of the arrest also remains unclear, as does the man's nationality.

“All we know is that he was arrested in Denmark. Danish police contacted us because we have a European police cooperation agreement with them. Now we will see what the next step is,” Lindgren told Danish news agency Ritzau.

The shooting took place on Wednesday night in a residential part of Kista in the northwest of the Swedish capital, not far from a school.

One of the men died an hour after the shooting, while the other died just after 4am on Thursday.

The spokesperson confirmed that the arrested man would be brought to Sweden where a decision would be taken on whether to remand him in custody, but that no date had yet been set for this.

Stockholm police said last week that the Kista shootings were part of a series of gang-linked crimes that have plagued the Swedish capital in recent weeks.