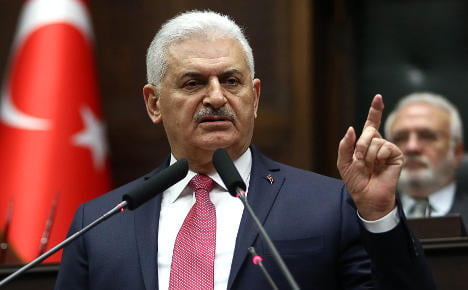 Turkey's PM is due to visit Denmark this month. Photo: Adem Altan/AFP

“Such a visit could not take place in light of the current attacks by Turkey against the Netherlands. Therefore I proposed to my Turkish colleague to postpone our meeting,” Rasmussen said in a statement.

“In normal circumstances, it would be a pleasure to welcome (Yildirim) with whom I had a frank and constructive dialogue on December 10 in Ankara,” he added.

Yildirim's visit had been planned for March 20, according to Danish radio station DR.

Rasmussen said Denmark “was following with serious concern the events Turkey, where democratic principles are under great pressure”.

A diplomatic row has erupted between Turkey and the Netherlands after the Dutch prevented top Turkish ministers from holding rallies ahead of a referendum on expanding President Recep Tayyip Erdogan's powers.

Erdogan accused the Netherlands – which was occupied by the Germans in World War II – of behaving like the Nazis.