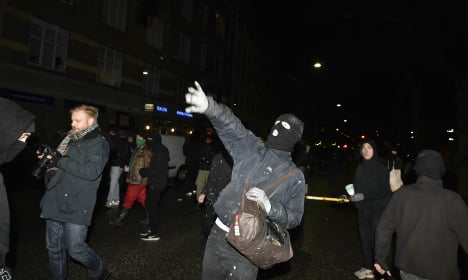 According to police, some of the protesters began hurling rocks, Molotov cocktails and other projectiles at both officers and their vehicles, and smashed window of banks and nearby shops.

Three people were briefly detained for attacking police while the other six were arrested for offences including carrying a weapon. All nine have been questioned and released.

“It’s about projectiles having been hurled, like paint bombs and which many of my colleagues were hit by,” police spokesman Kenneth Jensen told Danish news agency Ritzau.

Copenhagen was the scene of days of violent rioting after a group of squatters were evicted from an abandoned building on March 1st in 2007.

The so-called Youth House had been a popular hangout for anarchists and left-wing groups who protested the city’s sale of the building to a Christian congregation that later tore it down.