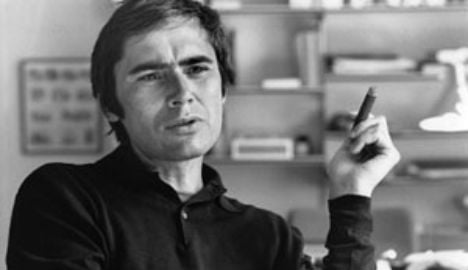 Preben Hertoft in 1973 as he began to make a name for himself. Photo: photo©ErlingMandelmann.ch/Wikimedia Commons
Dr Preben Hertoft worked from the 1970s onwards to break down taboos over sexuality in Denmark, speaking and writing on everything from erectile failure and premature erection, to gender reassignment and paedophilia.
He founded the Sexology Clinic at Copenhagen’s Rigshospitalet in 1986, and in 1994 he became Denmark's first professor of clinical sexology at Copenhagen University.
In 1984, he worked with Danish documentary maker and impressario Teit Ritzau on Paradise is Not for Sale, a film, book and exhibition centring on the story of Christine Jorgensen, the US soldier who underwent a sex change operation at Copenhagen University Hospital in 1952.
Christine Jorgensen then became the first clebrity transgender woman in the US, working as a speaker, actress, and nightclub entertainer, from almost the moment she returned home to New York.
But after interviewing Dr George Stürup, the psychiatrist who oversaw Jorgensen’s treatment, in the alte 1970s, Hertoft concluded that Denmark’s doctors had not been as liberal in the 1950s as many assume.
“The original intention of the medical team was not to change a man into a woman, but  to help a man who suffered from his homosexual impulses,” Hertoft and his co-author Thorkil Sørensen wrote in an article in 1979.
He is survived by his wife Nanna Hertoft, his son Michael Hertoft, and several children and grandchildren.
Hertoft specialised in psychiatry after finishing his medical degree, only moving into sexology on the urging on Kirsten Auken, his superior at the hospital’s psychiatry department.
As well as his clinical work, Hertoft was a prolific writer, in 1983 he published “It might be a madness,” a history of the sexual reform movement in the inter-war period, and in 2006,  “Wonder and Liberation, a collection of memoirs.