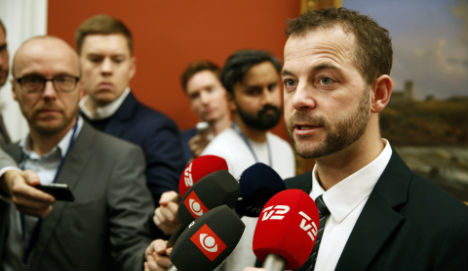 The push is being led by Morten Østergaard, leader of the Social Liberal Party. Photo: Scanpix/Nikolai Linares.
The Danish Social Liberal Party, The Alternative and the Socialist Left Party argue that the deal tying Denmark more securely to the EU will help Denmark’s economy by making international investors better able to predict the future.
The deal would also help prevent the eurosceptic Danish People's Party demanding that either the Liberal or the Social Democrat party hold a referendum as the price of its support after the next election.
“We suggest that the seven parties in parliament which would all like Danish membership of the EU to continue once and for all state that there will be no Danish vote on our EU membership,” Morten Østergaard, leader of the Social Liberal Party told Denmark's state broadcaster DR on Sunday.
The three parties hope to do a deal with the Liberal Party, the Liberal Alliance, and Conservative People’s Party, and Social Democrats, all of which support remaining with the EU.
This would leave out only the Danish People’s Party on the right and the Red Green Alliance on the left, both of which are eurosceptic.
The Danish People's Party has mooted the idea of following Britain and leaving the EU, if Britain manages to secure an attractive new arrangement with its European partners in its negotiations over the coming years.
“It can not be in Denmark's interest that we already waive the right to be free to do what we want in different situations,” Peter Skaarup, the party’s parliamentary leader, told Danish Radio.
Long-term agreements between parties on joint areas of interest are a distinctive feature of the Danish parliamentary system which help make it possible for minority coalitions to govern.