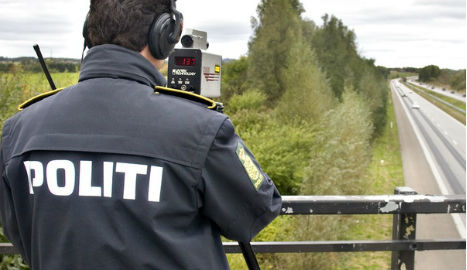 A police speed control in Denmark. Photo: Scanpix
The Mid- and West Zealand Police set up a speed control on on Monday in Kirke-Hyllinge, a village outside Roskilde. But as so few motorists were breaking the speed limit, they decided to instead fine those flashing warning signs to help other cars.
“There was only a single motorist who was caught speeding,”Martin Bjerregaard, the force’s press officer told the Dagens news site. “But when a traffic patrol came by and saw how the oncoming cars were flashing like crazy to warn other drivers, they began to fine motorists who flashed their headlights”.
Bjerregaard said that it was forbidden under Danish traffic law to flash your lights or honk your horn at any time, unless it was to warn other drivers of a genuine traffic hazard.
“Flashing motorists are at risk of breaking the focus of other drivers, preventing them from concentrating on driving,” he explained.
In total, the police fined four drivers 1,000 kroner ($143) each for flashing their lights to oncoming drivers.