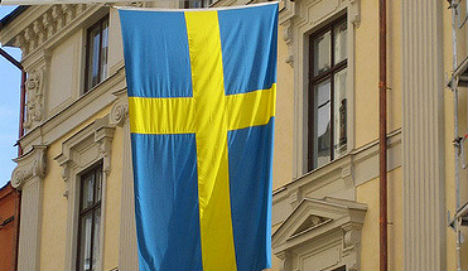 Mourners aim to lay flowers outside the Swedish embassy in Copenhagen (not pictured). Photo: David Clay
“After the terrible attack on Sweden, to which attention was correctly drawn by President Trump, the Nordic countries now stand together,” the organiser of the 'Pray for Sweden' event wrote on Facebook.
“We invite all citizens to walk past the Swedish Embassy on Friday 17.00, in honour of our Swedish brothers and sisters.”
The event, which nearly 3,000 people have expressed interest in and which which has been viewed by more than 250,000 people, has been cleared with the Copenhagen Police.
“Please remember to bring fake flowers,” Artpusher, the Danish prankster behind the event, told The Local. “The idea is that we quietly go there and quietly put down our fake flowers, but the most important thing is the posts we make afterwards about it on social media, so it’s a fake event.”
Trump baffled people across the world on Saturday when he referred to terrible events happening in Sweden on Friday night.
“You look at what’s happening,” he told his supporters. “We’ve got to keep our country safe. You look at what’s happening in Germany, you look at what’s happening last night in Sweden. Sweden, who would believe this?”
As there had in fact been no serious event of any kind in Sweden on Friday, people mocked him on Sunday and Monday by posting pictures of humdrum domestic setbacks taking place in the country, along with the Twitter hashtag #LastNightInSweden.
Trump's administration later clarified that the President had not been referring to specific event, but instead to an incendiary documentary that had aired on Fox News on Friday.
Artpusher, whose real name is Søren Vilhelm,  said he saw a fake memorial march as a way of protesting so-called 'fake news'.
“I’ve been talking to angry people all yesterday and all today trying to explain that this is not an anti-Trump demonstration, this is an anti-fake news demonstration,” he said.
“This is about being able to make your own mind up and make a decision based on facts. This is bigger than Trump.”
He said he was in a way wary of mocking Trump as he was simply too easy a target.
“Trump is a gift to any artist, because he’s like a walking cartoon, but he’s alive and he’s real,” Vilhelm said. “I could easily get a debate because I would insult a lot of people, and that is also my intention.”
Vilhelm, a successful artist, has been behind a long run of political pranks in Denmark, including the launch of his own spoof political party The Love Party.
“I don’t have money or power, but I can try and use humour and irony to make people aware of things,” he said.
He said he only expected a fraction of the thousand who had signed up to attend.
“When I called the police and said we have a thousand people coming, they got pretty pissed, but I said, 'this is a Facebook event. A very small amount of the people who attend on Facebook actually come'.”