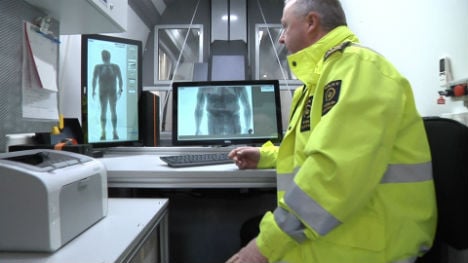 A trained customs officer studies a scan in the mobile van. Photo: SKAT
The van, the first mobile scanner to put into use by customs authorities worldwide, will be sent out to locations across Denmark to check travellers officers have reason to believe are smuggling narcotics.
“As smugglers are becoming more creative, we have make sure we are keeping up,” Preben Buchholtz, vice president of Danish Tax Authority (SKAT), explained in a press release.  “The new body scanner is an important resource which customs offices can use in their daily work to prevent narcotics being smuggled into the country.”
Buchholtz said that one of the advantages of the new system was the speed with which suspicions could be confirmed or dismissed, minimising the inconvenience to travellers.
Those suspected of carrying drugs are asked to stand on a platform inside the van, where they are scanned fully clothed.
A trained operator inside the van can then scrutinise the two images created, one of the torso and one of the full body. If the X-ray reveals susicious shapes, the suspect can then be passed to the police for a more thorough examination.
Police in New York have faced criticism for their use of military grade X-ray vans capable of looking through walls, but this is the first time a national customs agency has taken X-ray scanners out onto the streets.
Below is an image posted by SKAT of a woman who has swallowed several balls of cocaine.