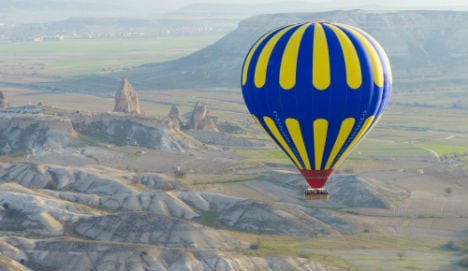 Balloon rides are popular in Cappadocia. Photo: Søren Breiting/Scanpix Denmark
The Turkish transport ministry said the individual died after “falling from the balloon which made a hard landing because of strong winds”.
The balloon had been making its descent during a trip over the famed sculpted rock formations in Cappadocia in Nevsehir province.
“Despite every intervention at the hospital, the individual lost their life,” the ministry said, quoted by Dogan news agency.
The individual was on the balloon with 20 others, mostly tourists and let go of the handle inside the balloon in a moment of “absent-mindedness” before they fell off, the agency said.
According to Dogan, the tourist had multiple injuries including fractures. A team from the accident research and investigation board was sent to Cappadocia to investigate the incident, the ministry said.
In Copenhagen, a Danish foreign ministry official told AFP one of their citizens had been killed. The official declined to give any further details.
Several companies offer hot-air balloon rides over Cappadocia, which is a major tourist attraction with its rock-carved underground cities and early Christian churches.
In December 2014, a Chinese tourist was killed when a balloon crashed in the Guvercinlik Valley while in May 2013, three Brazilian tourists died after two balloons collided above the region.