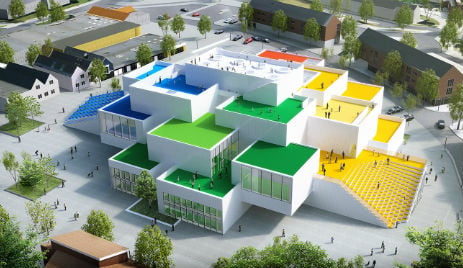 The Lego House, which resembles 21 giant interlocking Lego bricks stacked on top of each other, is under construction near the toy giant's headquarters in Billund, Jutland.
The 21 boxes are carried by a steel bridge, allowing lead architect Søren Askehave to do away with visible interior columns, creating an open, airy feeling. The facade has been tiled to give the impression that the building is made out of thousands of Lego pieces.
Bjarke Ingels, BIG's founder, has described the effect as resembling a “cloud of interlocking Lego bricks”.
“For us the Lego brick embodies the notion of systematic creativity,” he said when construction began in 2014. “The rigour and rationality of the Lego brick allows children of all ages infinite possibilities to create their own worlds and to inhabit them through play.”
The 2000m2 house will feature four coloured ‘experience zones’, an everlasting stream of lego bricks, and a ‘masterpiece gallery’ where enthusiasts can exhibit their creations.
“This will be an amazing place where Lego fans, their families and friends can experience – or re-experience – the playfulness of the Lego universe,” Jesper Vilstrup, General Manager of the Lego House, said in statement.when the opening date was announced on Thursday.
The central square of the building will be free to enter, but the centre will also host paid-for attractions in four ‘experience zones’.
The House will be opened with a town festival on 28 September 2017 in Billund, the Jutland town where the company has been headquartered since its foundation in 1932.
The Red Zone will feature an unending stream of bricks. The Masterpiece Gallery will be a place where lego fanatics can exhibit their creations. Entrance to the airy Central Square will be free for all. By December the external structure of the building had been largely completed. …and work was ongoing on cladding the exterior in Lego-like clay tiles.