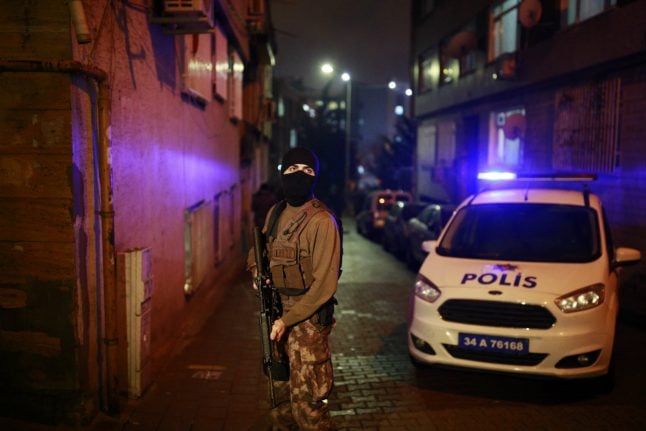 Turkish police in Istanbul in January 2017. File photo: Emrah Gurel/TT
The pair are said to have been trained by Isis since 2014.
“We have received information from Turkish security services stating that a Swedish citizen has been arrested in Turkey,” Nina Odermalm Schei, press chief with Swedish security agency Sapö, told news agency TT.
The men have been named as 35-year-old Abdullah el Halabi, Danish citizen of Lebanese origin, and Tofik Saleh, 38, Swedish citizen of Iraqi origin. According to the Anatolia news agency and other Turkish media, the pair have received training in terrorism during visits to Syria over several years, where they claimed to be participating in relief work.
The arrests, part of a large anti-terror operation, were made in the Adana province, close to the Syrian border, where the two suspects were heading to the north-west of that country.
After interrogating the suspects, police now believe that they were planning to travel to Europe to carry out terror acts in the name of Isis. These assertions are based partly on pictures found showing the Danish citizen in war situations.
One of the factors that brought the pair under suspicion is said to have been a tip from the Swede's wife, who returned to Sweden and contacted authorities to inform them that her husband had travelled to Syria with the couple's two daughters.
That tip-off was received some time ago, but it has not proved possible to locate the man, who has travelled extensively in chaotic Syria under a false identity, until now.
Odermalm Schei told TT that she does not have any information about the potential locations of the terror attacks the pair are accused of planning.
“We are now concentrating on gathering more information about this arrest and what the Turkish investigation has uncovered,” said the press chief.
The Swedish Foreign Ministry said that it did not know anything about the matter, other than that a Swedish citizen had been arrested.
“We are trying to obtain further information from the Turkish authorities through our Consulate General in Istanbul,” Foreign Ministry press officer Rasmus Eljanskog told TT.
Danish authorities are also currently looking into the reports.
“The Danish Foreign Ministry is aware of the reports of the arrest of a Danish citizen in Turkey. The Ministry is working with the embassy in Ankara and is looking into the situation,” a spokesperson for the ministry told Danish broadcaster DR.
Denmark's security agency PET did not wish to comment further, reports DR.