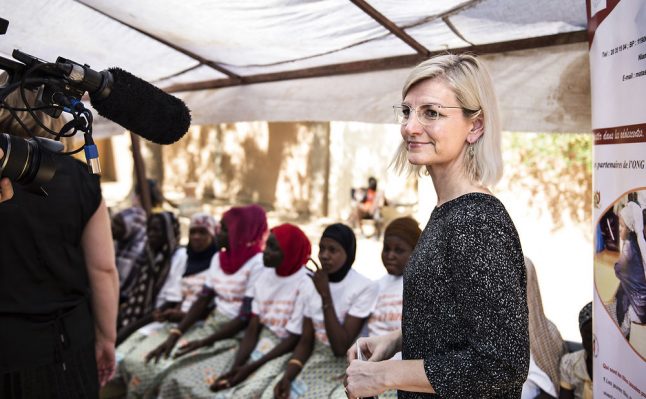 Development Minister Ulla Tørnæs, shown here during a recent visit to Niger, will represent Denmark at the conference. Photo: Ida Guldbæk Arentsen/Scanpix
Development aid ministers from Sweden, Denmark, Belgium, the Netherlands, as well as representatives from over 50 countries are expected to attend the “She Decides” conference on March 2.
In one of his first acts as president, Trump reintroduced the global gag rule, enacted by Ronald Reagan in 1984, which prohibits foreign charities from using US federal funding to provide abortion services, information, counselling or referrals.
“It's therefore important that we stay strong and explain that we will continue to stand for women's rights,” Swedish Deputy Prime Minister Isabella Lövin told AFP.
She said the international community “would not roll back several decades” on the right of women to decide over their bodies.
“Information about safe abortion has helped fewer girls to become pregnant and allowed them to go to school and get an education,” she said.
Lovin, who also serves as environment and development aid minister, made headlines last week when she published a photograph of herself surrounded by seven female colleagues as she signed a climate bill, mocking a photo taken of Trump in the White House when he signed the abortion decree.

It is too early to say how much money the conference will raise, a Swedish government spokeswoman said.
But the Netherlands on January 28 launched the “She Decides” website to compensate for what it said was a 600 million euro ($640 million) annual funding gap caused by Trump's ban. The nation kickstarted the fund with 10 million euros ($10.7 million).
Denmark then announced that it would kick in 75 million kroner (roughly €10 million) and said it had recruited like-minded countries to join in a lobbying effort to get the EU Commission to at least match that amount.