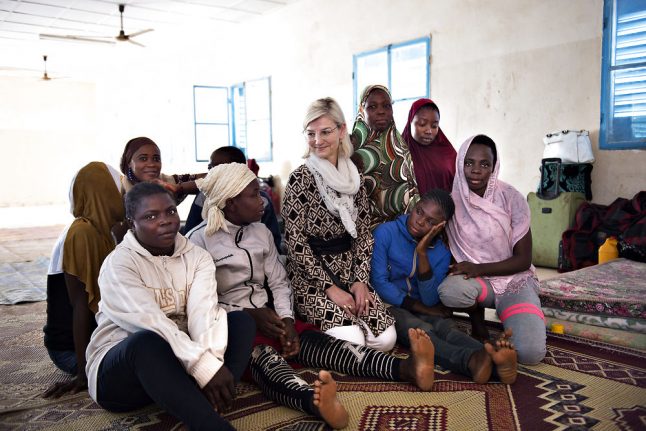 Danish Development Minister Ulla Tørnæs during a recent visit to an IOM migrant centre in Agadez, Niger. Photo: Ida Guldbæk Arentsen/Scanpix
The Foreign Ministry announced the new initiative on Tuesday, along with a 75 million kroner commitment by the Danish government to fund organizations that will be affected by Trump's move to reinstate what is formally known as the ‘Mexico City Policy' but more popularly described as the “global gag rule”.
“I am worried about the consequences that the American decision to reinstate the Global Gag Rule can have on the world’s poorest and most vulnerable women and girls,” Tørnæs said. “Therefore I have gathered an alliance of European countries including Denmark which, like us, have this topic high on their agenda.”
The ministry said that Denmark took the initiative to enlist ministers from other EU countries to sign a joint letter to EU urging action to help counteract the American decision. According to a report in Politiken, the other signatories are Sweden, France, Germany, the Netherlands, Finland, Belgium and the UK.
The Netherlands had previously announced plans to create a fund to finance access to reproductive education, birth control and abortion in developing countries.
Tørnæs said that she has encouraged the EU to at least match the Danish funds.
“It’s important that the organizations that world with family planning and sexual and reproductive rights aren’t forced to shut down their efforts. Denmark cannot achieve this alone, but I have found 75 million kroner and I have together with the other like-minded European countries encouraged the EU commission to do the same,” she said.
According to the World Health Organization, approximately 22 million women worldwide receive unsafe abortions every year, with the vast majority of those living in developing countries that would be affected by the Trump administration decision.
Marie Stopes International, an NGO that provides contraception and access to safe abortions in 37 countries around the world, estimates that the loss of US funding would cause 6.5 million unintended pregnancies, 2.1 million unsafe abortions and 21,700 maternal deaths during Trump's first term.