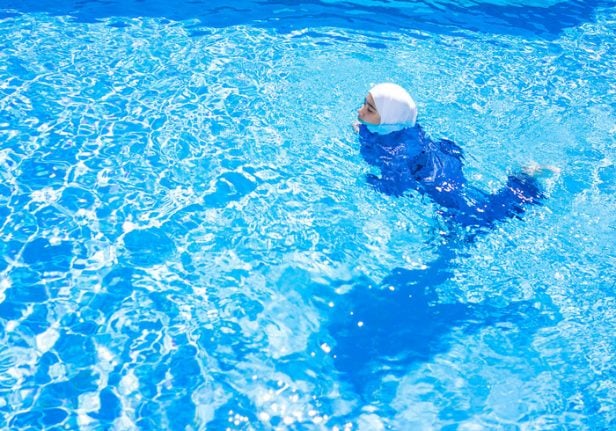 The Institute for Human Rights argues that it is "problematic" to take away a programme that local Muslim women want. Photo: Jasmin Merdan/Iris
The Gellerupbadet swimming hall in Denmark’s second largest city has offered a few hours of female-only swimming every Saturday for nearly ten years. The programme is primarily used by Muslim women from Gellerupparken, a housing estate where four out of five are from immigrant homes.
The council voted 26-5 to end the programme.
National government party Venstre was behind the move, saying that gender-separated swimming has no place in Denmark.
“Children and adults need to learn that it is completely natural to swim together regardless of religious belief. Therefore it is a disservice and not an integration initiative when special offers are made [to minorities, ed.],” the proposal read, according to TV2.
The council’s vote is unlikely to be the end of the matter, however. The Institute for Human Rights (Institut for Menneskerettigheder) said ahead of the council’s decision that it would likely file a complaint with Denmark’s Anti-Discrimination Board (Ligebehandlingsnævnet).
The institute argues that Venstre’s interpretation of gender-separated swimming as a sign of repression is wrong as it is the women of Gellerup themselves who want the programme.
“When you take away the opportunity you make it more difficult for ethnic minority women to use the swimming pool and participate in society. I believe that is problematic,” institute spokeswoman Maria Ventegodt Liisberg told news agency Ritzau.
“It is very important to work toward eliminating social controls, but there is nothing to indicate that the women use this programme because they are forced to by their husbands or fathers,” she continued. “On the contrary, surveys indicate that strong women who work and who speak Danish are the ones who choose to take advantage of this offer.”
Female-only swimming sessions have caused controversy elsewhere in Denmark, including in the capital where hundreds of young Muslim girls have flocked to swimming lessons in Copenhagen's immigrant-heavy Tingbjerg district.
Despite the programme’s popularity, the City of Copenhagen's deputy mayor for culture and leisure, Carl Christian Ebbesen of the Danish People's Party, has said that creating segregated swimming sessions for Muslim girls was bad for integration and “destructive” for Danish culture.
“It is completely crazy to meet these demands. There is a desperately short supply of swimming pools, so we shouldn't be closing them down by putting curtains in front of the windows and signs saying ‘just for girls' just to meet the demands of religious fanatics,” Ebbesen told Berlingske in April 2016.
According to Ritzau, Aarhus is the first municipality in Denmark to make an active ruling on gender-separate swimming.