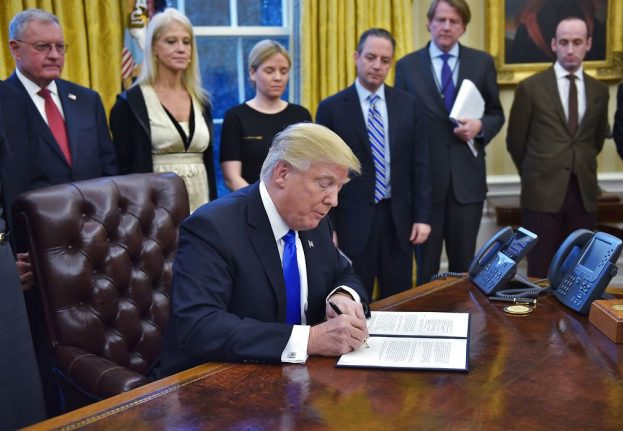 Trump's decries on immigration were part of a flurry of executive orders and presidential memorandums signed since taking office on January 20th. Photo: MANDEL NGAN/SCANPIX
US President Donald Trump on Friday signed an executive order banning citizens from the Muslim-majority countries Iran, Iraq, Libya, Somalia, Syria, Sudan and Yemen from entering the United States for 90 days.
See also: In rare move, Denmark's foreign minister speaks out against Trump's entry ban
Additionally, Trump suspended the US refugee resettlement programme for 120 days and put an indefinite stop to the acceptance of Syrian refugees.
Danes who also have citizenship from Iraq, Syria, Iran, Sudan, Libya, Somalia and Yemen called the ministry over the weekend asking for guidance about the new policies.
Ministry spokesman René Dinesen said there were a handful of calls from dual-citizen Danes who have current plans to travel to the US.
“They typically say, ‘I’m going to the US in a couple of weeks. What should I do?’,” he told Politiken.
The ministry, after consulting with Washington, has advised the dual-citizen Danes that they won’t be able to enter the United States.
“We’ve told them that they are affected by the executive order and therefore can’t travel to the US,” Dinesen said.
According to Statistics Denmark, there are 57,374 Danes who also have citizenship in the seven predominantly Muslim countries on Trump’s blacklist.
The Danish Foreign Ministry has updated its travel guidelines to the US to include the new executive order, but has referred those affected by it to contact the US Embassy in Copenhagen.