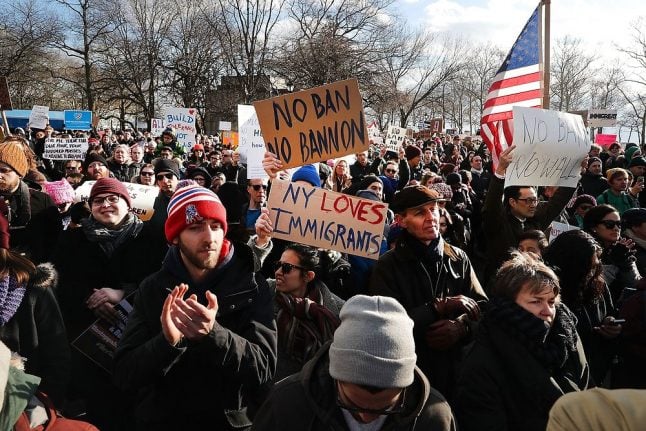 Trump's immigration policies touched off protests across the US, including New York City's Battery Park. Photo: SPENCER PLATT/SCANPIX
“The US decision not to allow entry of people from certain countries is NOT fair. Meet every man/woman as an individual,” Samuelsen tweeted on Sunday.

The US decision not to allow entry of people from certain countries is NOT fair. Meet every man/woman as an individual #dkpol

As of Monday morning, Samuelsen was the only high-ranking Danish official to release a clear response to Trump’s immigration moves, which sparked anger, confusion and protests in airports across the United States.
Prime Minister Lars Løkke Rasmussen, a prolific Facebook user, was relatively quiet on social media over the weekend, posting only about a cycling race and the government’s anti-gangs plan. However, when questioned by political commentator David Trads on Twitter, Rasmussen indicated that he stood by Samuelsen's comment.
“Does the fight against religious intolerance also apply to Trump's entry ban on Muslims?” Trads asked.
“The foreign minister made that very clear yesterday!” Rasmussen responded.

Samuelsen’s decision to openly criticize the policy raised a number of eyebrows, as Denmark is typically seen as a nation that falls in line with US policy.
“This is a very unusual remark from a Danish foreign minister. I cannot remember when a Danish government, regardless of [political persuasion] last blatantly spoke out against an American president,” political commentator Hans Engell told news agency Ritzau.
The anti-immigration Danish People’s Party, (DF) which supports the coalition government, criticized Samuelsen for speaking out.
“As Denmark’s foreign minister, Anders Samuelsen should ensure that we have a good relationship with the US. Therefore he would have been best served by saying ‘no comment’,” DF spokesman Søren Espersen said.
The very same Espersen called Trump’s Muslim ban “stupid” and “crazy” during the US presidential campaign but now seems to have changed his tune, saying Denmark “does not need to have an opinion” on Trump’s entry ban since the nation isn’t directly affected.
In addition to his freeze on refugee settlement Trump has also announced that visa applications from seven Muslim countries — Iraq, Syria, Iran, Sudan, Libya, Somalia and Yemen – are on hold for at least 90 days.
The White House appeared to reverse course somewhat on Sunday, saying that US green card holders from those nations would not be affected. However, dual citizens of Western countries, including Denmark, who were born in any of the countries on Trump’s blacklist are affected by the executive order.
This would appear to include Conservative MP Naser Khader, one of Denmark’s most respected experts on the Middle East. Khader, a senior fellow at the Washington DC-based Hudson Institute, was born in Syria.
Due to travel to the US in two weeks, Khader was critical of Trump’s move.
“It’s crazy. It was not thought out. I think it’s completely fair to protect your borders and screen people thoroughly to ensure that there aren’t terrorists among the immigrants,” Khader told Politiken. “But this is not the solution.”