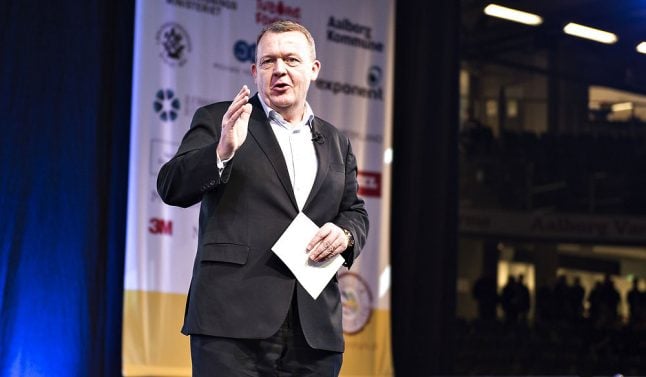 Rasmussen addressing a crowd in Aalborg on Thursday. Photo: Henning Bagger / Scanpix
We know that sounds weird, so perhaps we should start at the beginning.
Shortly after midnight on Wednesday, Rasmussen posted a photo to Facebook after participating in the official state visit of Iceland’s president, Guðni Th. Jóhannesson. The Danish PM was showing off his newly-awarded Order of the Falcon along with a number of other official recognitions he’s received. He said he was eager to get out of the formal attire and “into a pair of jeans”.
While the PM’s outfit elicited both compliments and snide remarks, what really seemed to grab the attention of Facebook users was the boxed chocolate fountain in the background.
When the chocolate fountain was pointed out, Rasmussen told a Facebook user that it’s been sitting there for awhile.
“It was last in use on New Year’s Eve and is just sitting there waiting for ‘someone’ to take it down to the basement,” he wrote in one response.
The chocolate fountain then took on a life of its own, particularly when Johanne Schmidt Nielsen of the Red-Green Alliance (Enhedslisten), a darling of the Danish left, reposted the photo with a pink arrow pointing to the box.
“Shit, it’s cool to have a chocolate fountain,” she wrote.
As opposed to certain political leaders who fire off angry social media missives at any perceived slight (we won't name names), the Danish PM seemed to embrace it.
His next post to Facebook was a 14-second video clip showing the chocolate fountain in action. The video quickly garnered 70,000 views and yet another round of the Danish PM interacting with Facebook users in smiley-laden exchanges.
“Remember to share Lars and then we’ll need to go out for a long run the next day,” wrote Anna Nielsen.
“That will probably be necessary,” he replied, again with a smiley.
The goodwill even seemed to spare Rasmussen, who earned the nickname ‘Luxury Lars’ for a spending scandal, from criticism.
“Congratulations on being able to afford a chocolate fountain,” wrote Claus Pedersen in a comment that only received six likes.
“It wasn’t expensive. The chocolate was the biggest expense, but it can be saved in the fridge until next time,” the PM shot back in a response that got 113 likes. He then clarified that he thinks he spend 375 kroner on it.
Rasmussen’s down-to-earth response to the chocolate fountain incident pushed him over 200,000 Facebook users, the first Danish politician to reach that mark.
Benjamin Rud Elberth, a digital communication expert for TV2, said that it wasn't surprising to see Rasmussen, who has a well-known affinity for food and drink, connect so effortlessly with Danes on Facebook.
“He's successful on social media because he comes across as exactly like the rest of us. So his strength is that he of course makes very well thought-out and tactical posts but he also sometimes just lets go. Which can also be a tactic,” Elberth told the broadcaster.