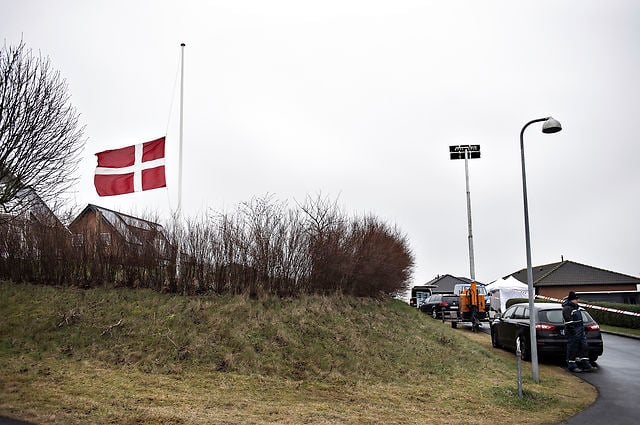 A flag flies at half mast in the Ulstrup neighbourhood where the family tragedy took place. Photo: Henning Bagger/Scanpix
East Jutland Police wrote in a press release that investigators believe a 45-year-old man murdered his wife and four children before killing himself.
The victims were the man’s two sons, aged 3 and 11, two daughters, aged 6 and 16, and his 42-year-old wife.
“Based on the information available in the case, it is the police's initial assessment that the four children and the 42-year-old woman were all killed by the 45-year-old man, who then took his own life,” police wrote.
The police update ruled out previous media speculation that the six deaths were the result of a gas leak.
“There is nothing at present indicates that gas was the cause of the deaths,” police added.
Favrskov Municipality officials said that its crisis teams would once again be on hand at the victims’ school and daycare institution.
“We are deeply affected by what happened and we send our condolences to those affected. Tomorrow [Wednesday, ed.] we will stand by ready at the daycare and school with care and support for [the victims’] friends,” the municipality wrote on its website.
A torchlight procession in support of the family will be held on Thursday evening in Ulstrup, which is located about 20km southwest of Randers in central Jutland.