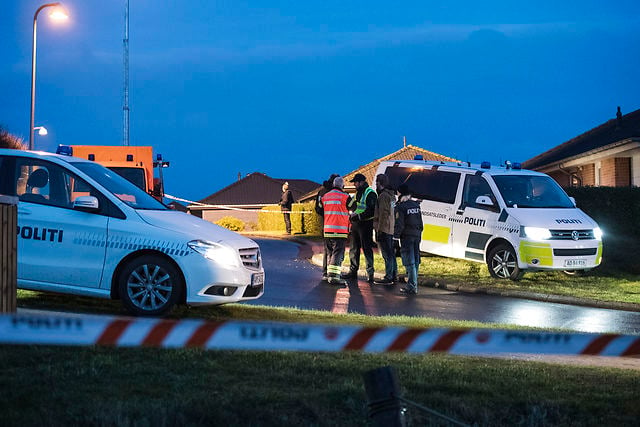 Four children and two adults were found dead in the house on Monday. Photo: Bo Amstrup/Scanpix
East Jutland Police said that two adults and four children were discovered dead in the house after receiving a tip-off about a ‘suspicious situation’ at the address.
“Upon arrival to the location we found six people – two adults and four children – all of whom were dead,” police said in a Monday press release.
In an update sent on Tuesday morning, police said that officers were continuing their work at the address and that an investigation would likely take days.
“We cannot yet say with certainty what happened in the house; the ongoing investigation and the result of the autopsies will help answer that. We are investigating the case as a homicide and we are working hard to establish details,” police wrote.
Autopsies were scheduled for later on Tuesday.
Favrskov Municipality has mobilized crisis teams to be on hand at area schools and daycare institutions. Although the identity and ages of the children have not been publicly released, comments from the head of the municipality’s youth department would lead one to believe that the children were enrolled in local schools and institutions.
“This is a tragic and awful event that has occurred in Ulstrup. It will of course affect the day in both the daycare institution and the school,” Rasmus Møller told local broadcaster DR Østjylland early on Tuesday.
“We’ve activated our bereavement and crisis personnel and we will be there for the children and to help handle the sorrow they will experience today,” he added.
Ulstrup is located about 20km southwest of Randers.