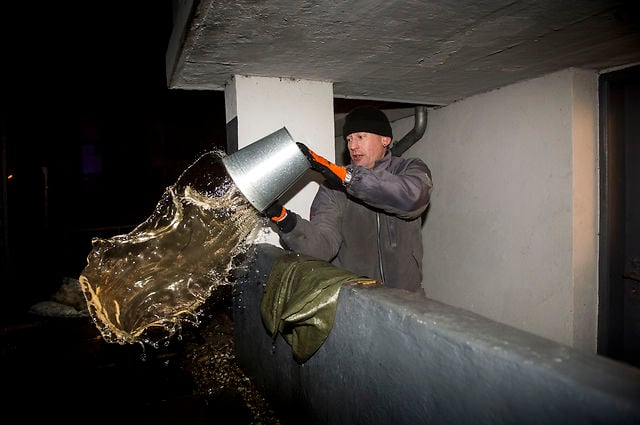 Kolding resident Niels Holflod fights to empty his basement in the early hours on Thursday. Photo: Palle Peter Skov/Scanpix
The water rose so high in areas in southern Denmark that the Danish Meteorology Institute (DMI) said that levels reached heights that statistically only come once a century.
“We had 100-year floods in Sønderborg, Bagenkop, Aabenraa, Rødbyhavn, Hesnæs, Rødvig and Køge,” DMI spokesman Frank Nielsen told broadcaster DR early on Thursday. Emergency workers pump water at Aabenraa Harbour. Photo: Søren Gylling/Scanpix
The highest recorded levels were in southern Lolland and Jutland, where water topped out at 177 centimetres above normal. In Copenhagen, water rose 87cm while just south of the city in Dragør the water level was 139cm above normal.
DMI said that the waters wouldn’t recede until late morning on Thursday.
Despite the so-called 100-year flooding, the storm’s arrival was so well warned in advance that emergency preparations were able to avert major damage.
“It appears as if the different players like emergency services and the police had enough time to be well-prepared so they could fend off the worst problems. They were definitely not caught with their pants down,” Nielsen said. Emergency preparations in Faaborg on the island of Funen. Photo: Ólafur Steinar Gestsson/Scanpix
Emergency responder Falck said that it only had to respond to nine emergency calls as the waters rose.
“There was actually less to do than on a normal night. We have thus far only been called out on nine water-related jobs throughout the whole country,” Falck spokesman Jesper Jakobsen told Ritzau, adding that his company was “surprised” by the quiet night.
“We need to send our compliments to Beredskabsstyrelsen [the Danish Emergency Management Agency, ed.], which did a great job of preventive work,” Jakobsen said. Boating docks at Sønderborg were underwater on Thursday morning. Photto: Lene Esthave/Scanpix
At the Danish Emergency Management Agency, they in turn gave credit to DMI for its “impressively precise forecasts” that allowed for proper preparation.
While the worst of the flooding came and went without extensive damage, it was replaced by bitter cold on Thursday with daytime highs only expected to peak at -1C.