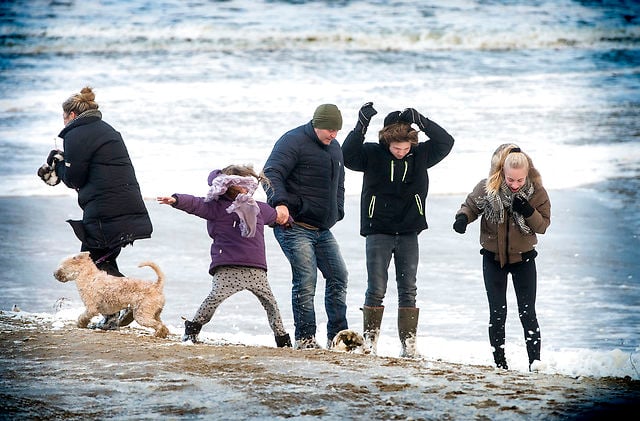 The storm hit as families gathered across Denmark to celebrate Christmas. Photo: John Randeris/Scanpix
The nation’s police districts said early on Tuesday that no one had been injured by the dreaded Storm Urd, which also battered Sweden. Trees, however, were not so fortunate as many succumbed to Urd’s strength in the Copenhagen area, and on the islands of Funen, Lolland, Falster and Bornholm.
The latter also was forced to accommodate an emergency landing after an SAS flight was struck by lightning.
In northern Zealand, around 20 summer homes were flooded by water levels that rose to around 120-150 centimetres above average overnight. Urd brought increased water levels across Denmark, including here in Thorsminde on the west coast. Photo: Morten Stricker/Scanpix
But police said that it was “incomprehensible” how Denmark escaped nearly unscathed from Storm Urd. North Zealand Police spokeswoman Henriette Døssing told news agency Ritzau that Danes had taken authorities’ warnings to heart and prepared for post-Christmas storm accordingly.
“I think that is one of the reasons that no one was hurt. People followed the advice that both the police and other authorities gave before the storm on how to best secure their homes and belongings against storm and water damage,” she said.
The Øresund Bridge between Copenhagen and the southern Swedish city of Malmö reopened to traffic at 2.40am on Tuesday after closing at around 10pm the previous evening. Drivers were however warned to drive carefully and stay below 50 kilometres an hour on the 7.8-kilometre road bridge.
The Crown Prince Frederik Bridge over Roskilde Fjord was also temporarily closed due to rising water levels.
Storm Urd landed in Denmark at just past 7pm on Monday, first hitting the west coast of Jutland. Wind strengths were measured at up to 37.6 metres/second (135 kilometres/hour). Speeds of 32.6 mps or 117 kph and above are officially considered hurricane-strength. Residents in the town of Jyllinge near Roskilde awoke Tuesday to find that the Roskilde Fjord had flooded their street. Photo: Claus Bech/Scanpix