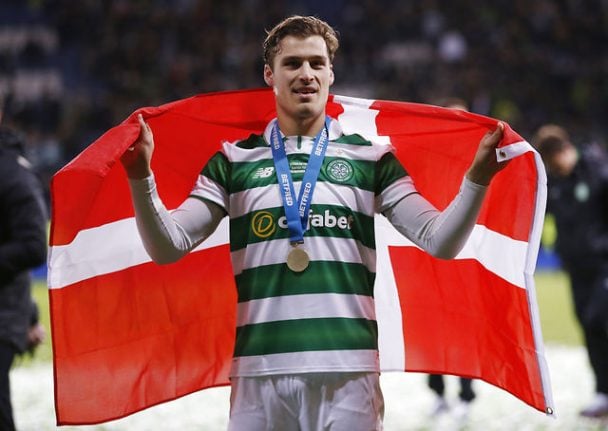 Celtic's Erik Sviatchenko celebrates winning the Scottish League Cup Final last month. Photo: Russell Cheyne/Reuters/Scanpix
The 25-year-old, who opted to play for Denmark and not Ukraine where his artist father was born, has been an integral part of a Celtic defence which has looked impregnable for large parts of the season.
It has been the rock on which the club has built their success in the League Cup and established an 11 point lead at the top of the Scottish Premiership.
Sviatchenko has settled well off the pitch since his arrival from FC Midtjylland in January, with girlfriend Ann Rudmose his club teammate after the Danish women's international signed for Celtic following the birth of their son in April.
“It has been a positive ride forward so far,” said Sviatchenko.  “There have been some bumps on the way but they are bumps I've been able to overcome with the help of my team-mates and the staff. I'm really pleased with my development as a human being and as a footballer because it's important to divide the two.
“When you go on the pitch you put on the Celtic shirt and perform as a footballer but you need to live well outside the pitch and that's why I'm able to perform at a high level because I feel comfortable and I feel like I can improve.
“It's a good environment at Celtic.”
Sviatchenko has already collected a Scottish Premiership and League Cup winner's medal in his first year at the club.
But the Dane says he's not content with just winning trophies with Celtic and is determined to write his name into the club's history.
'It's about being relentless'
He took the first step on Tuesday as he and his teammates secured a place in the record books with a win over Hamilton.
That victory extended their unbeaten start to the domestic season to 19 matches that sees them surpass the run of Martin O'Neill's side of 2000/01 as Brendan Rodgers enjoys the best ever start by a Celtic manager in their debut season.
And the desire of Sviatchenko is to achieve more records with the Glasgow giants.
“I'll do everything I can so we can lift as many titles as we can. I'm here to win trophies and be remembered,” the Dane said.
“It means a lot to me to be a part of something that can make history and not just be around for nothing. I'm looking forward to doing everything I can with my team-mates,” he added.
The win over Hamilton strengthened Celtic's grip on the Scottish Premiership as they moved 11 points clear of Rangers with two games in hand over their fierce rivals, whom they meet in the Old Firm clash on New Year's Eve.
Dundee are the visitors on Saturday and Sviatchenko said there would be no let-up as they pursue their sixth league title in a row.
“It's about being relentless and keeping going.”