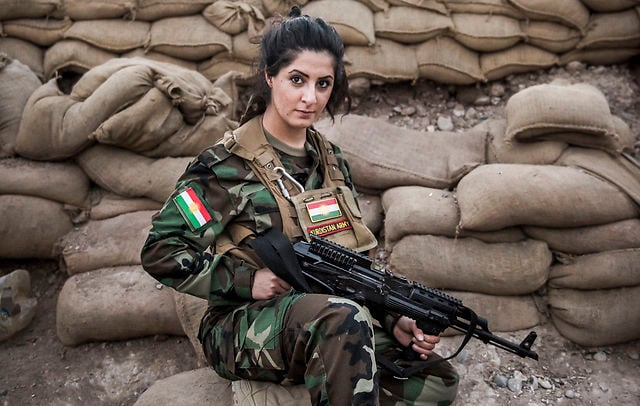 Joanna Palani has spoken often and openly about leaving Denmark to take part in armed conflict abroad. Photo: Asger Ladefoged/Scanpix
Palani, a Danish citizen who came to the country as a three-year-old refugee, had her passport confiscated last year and was slapped with a one-year travel ban for violating the rules, which are meant to make it easier for authorities to stop Danes from fighting alongside terror groups.
She was jailed last week and has admitted to violating her ban by travelling to Qatar in June.
It’s unknown if she also visited war zones on that trip but Palani has spoken openly in the Danish press about travelling to war zones in the past to fight against Isis.
“I would rather die in battle than on the run,” she told Politiken newspaper in a 2014 interview.
She has criticized the Danish authorities for pursuing her under the foreign fighter rules even though she is ostensibly on the same side as the Danish military.
“How can I pose a threat to Denmark and other countries by being a soldier in an official army that Denmark trains and supports directly in the fight against the Islamic State?” she wrote on Facebook when she lost her passport.
Palani, 23, has fought alongside the Kurdish Peshmerga forces, which are supported by Western nations including Denmark. However, she has also been associated with the Kurdish militia group YPG, which has ties to the Kurdistan Workers' Party (PKK), which is officially recognised as a terror organisation by the EU and the US.
The case against Palani got underway last week in Copenhagen City Court but is being held behind closed doors.
According to her lawyer, she will be back in court on December 20th and risks a six-month prison sentence for violating her travel ban.
‘foreign+fighter’+rules. &source=Denmark\'s+news+in+English'); return false;" href="#">
Url copied to clipboard!