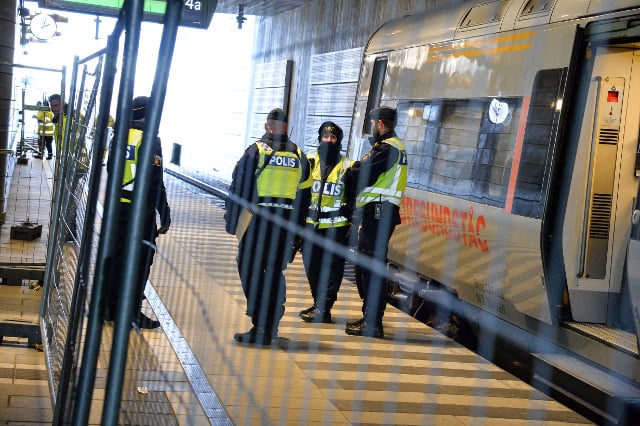 Border control in Malmö. File photo: Johan Nilsson/TT
Denmark in particular has expressed its desire to continue with internal border checks that it initially implented in January 2016 as a result of the the European refugee crisis.
“There is no doubt that it is our aim [to continue border checks]. The issue specifically is what will happen after February 12th. I see it as essential that Denmark continues to have border control,” Danish integration minister Inger Støjberg said after a meeting with ministers from Germany, Sweden, Austria and Norway in Brussels on Friday.
Sweden's position appeared a little milder, if similar, with Interior Minister Anders Ygeman stating that the situation remained unchanged.
“We stated that we see the same situation ahead of us as that we saw a month ago. There are no significant changes,” said Ygeman, in reference to extension obtained from the EU commission by the five countries in October.
Ygeman told news agency TT that all countries were in agreement with Denmark's strong line on the extension of the controls.
“None of the countries at this time have changed their position with regard to a month ago, when we agreed on the necessity of border controls,” said Ygeman.
Discussions are also continuing between Denmark and Sweden as to how border controls on the Öresund Bridge can be made more convenient for commuters.
“Our problem has been that Denmark has undergone a government reshuffle, so my counterpart has been replaced,” Ygeman said, referring to the recent addition of two parties to the new coalition government in Copenhagen.
“But I had a very good conversation with Inger (Støjberg) today and remain hopeful that we can move forward with Denmark,” said Ygeman, who hopes for a meeting with new Danish justice minister Søren Pape Poulsen in the near future.
Url copied to clipboard!