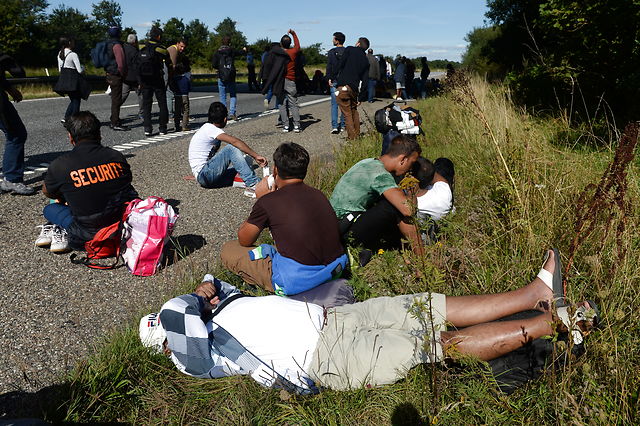 File photo of refugees on a Danish motorway in September 2015. Photo: Claus Fisker/Scanpix
According to a report in Jyllands-Posten, DIS suspected that roughly 800 asylum seekers were lying about their age and thus asked the University of Copenhagen's Department of Forensic Medicine (Retsmedicinsk Institut) to run tests to verify just how old the asylum seekers really are.
Using X-rays of their teeth and finger bones, the institute concluded that 74 percent of those tested – or around 600 individuals – are actually adults.
The number of age tests requested by DIS thus far in 2016 more than doubles those performed in 2015, which was in itself a record year for age verifications. The Department of Forensic Medicine said it is likely to have performed 1,000 age tests by the end of the year.
In the Danish asylum system, unaccompanied minors are given a number of advantages over adults, including the ability to bring their parents to Denmark.
Integration Minister Inger Støjberg said the large number of apparent age cheats is proof that the Danish asylum system is working as it is supposed to.
“The Danish Immigration Service makes a major effort to expose those who are cheating and is also working on how it can happen even faster,” she told Jyllands-Posten.
But the head of asylum at the Danish Refugee Council warned that the age test results may not be as simple as they seem.
“There are many of these young people who don’t know precisely how old they are because it is not something that is registered in their home countries in the same way as it is in Denmark,” Eva Singer told Jyllands-Posten.
She added that Danish immigration authorities often rely solely on the results of the age tests and disregard information to the contrary.
“We can see it, for example, with Afghans. The [Danish] authorities say that everything can be falsified in Afghanistan and therefore they won’t accept paperwork. In that situation, we can have a guy who has papers showing that he is 18 but if the age test says 18, then it’s 18,” she added.
DIS denied that it disregards paperwork that might contradict the results of an age test and a spokeswoman said that the agency as a rule of thumb always “accepts a difference of one year between the youngest age within the likely age span [of the tests, ed.] and the age that the applicant reports”.
“If the [age test] result’s most likely span is 18-19, for example, and the applicant as report 17 years, then we set the age at 17 years,” Teresa McNair wrote in a statement to Jyllands-Posten.