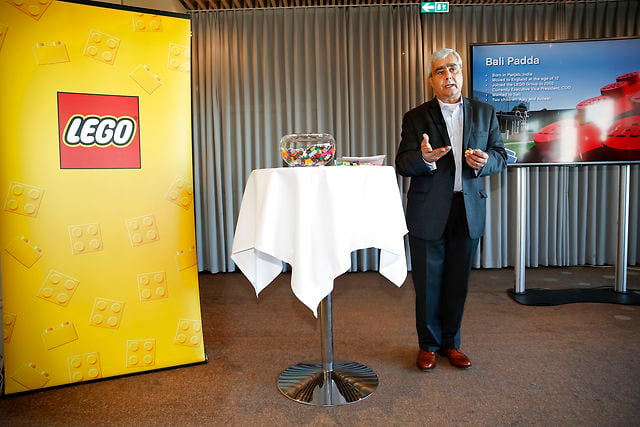 14-year Lego veteran Bali Padda will be the first non-Dane to lead the Lego Group. Photo: Nikolai Linares/Scanpix
Chief executive Jørgen Vig Knudstorp took over Lego when it was on verge of collapse in 2004 and transformed it into one of the industry's biggest success stories, but he will step down by the end of the year to head a new unit focusing on the Lego brand, called Lego Brand Group, the company said.
“With our recent growth and globalisation come new and exciting opportunities for the brand,” deputy chairman and fourth generation owner Thomas Kirk Kristiansen said in a statement.
“We establish the Lego Brand Group to look into these new opportunities,” he said.
Lego's colourful toy blocks have proved resilient to the rise of digital devices which is battering the traditional toy industry, but the company has also been adept at using different channels to engage with children.
The group has allowed partners to develop branded video games, a Hollywood blockbuster, television shows and theme parks.
The company has grown over the years, but has always remained owned by the family of creator Ole Kirk Kristiansen since its founding in 1932.
Its sales have increased five-fold in the past 10 years, to 35.8 billion kroner (4.8 billion euros, $5.1 billion).
The company shake-up should be seen in the light of its loss-making expansion into non-core businesses before Knudstorp took over, Niels Lunde, editor of Danish business daily Borsen and the author of a book about Lego, told AFP.
“Lego uses its brand in more channels now than it used to, and that is what Jørgen Vig Knudstorp will oversee in the new role,” he said.
Knudstorp was the first non-family member to take the helm of the group.
He will be replaced at the Lego Group by 14-year Lego veteran Bali Padda, currently the company's chief operating officer.
Padda, a Briton, will be the first non-Dane to head Lego Group, which will manufacture the plastic bricks.
“Lego has become so big that it's hard for one chief executive to carry out all of the tasks,” Lunde said.  “The chief executive role (of Lego Group) will become smaller now than it has been.”
The new unit, Lego Brand Group, would work with the Lego Group as well as other units, including Lego Education and attractions at the Merlin Entertainments-controlled Legoland theme parks.
Knudstorp will also become chairman of Lego Group.