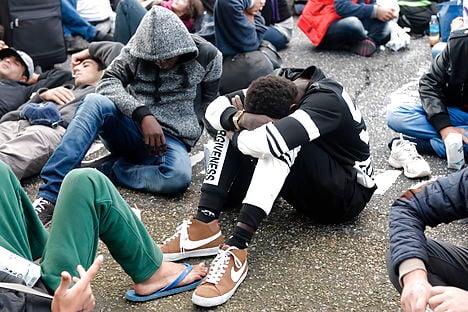 File photo of refugees on a Danish motorway in September 2015. Photo: Claus Fisker/Scanpix
The asylum seekers had been told that they would be sent to Hungary, as it was the first EU country that registered them. In the new letter, however, they told that their applications will now be processed in Denmark.
The migrants’ return to Hungary had been set on hold after reports that asylum seekers in Hungary were living under inhumane conditions. DIS and the Danish Foreign Ministry investigated the conditions in Hungary. DIS told Politiken that the Danish authorities’ investigation has concluded but declined to say what was discovered.
However, the agency said that the decision to reverse course on the 350 asylum seekers did not have anything to do with its investigation into the conditions they would have faced in Hungary. Instead, DIS said the deadline for returning the asylum seekers has now expired.
Andreas Kamm, the general secretary for the Danish Refugee Council, praised the Danish authorities’ decision and told Politiken there “is good reason to worry about refugees’ legal rights in Hungary and Hungary’s willingness to deal with refugees under the EU’s regulatory framework.”
The anti-immigration Danish People’s Party, on the other hand, was furious with the decision.
“It is highly objectionable that if just one single country behaves poorly enough then Denmark will just take over and process its asylum cases,” party spokesman Martin Henriksen said.
DF said it would demand a further explanation from Integration Minister Inger Støjberg.